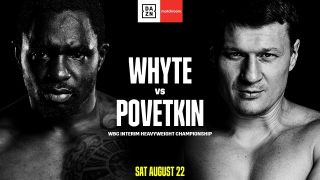 Whyte vs. Povetkin may be the best boxing matchup that’s been made since the sport returned from the extended pandemic break. While other fight cards have largely been filled with tune-up bouts and showcase fights where everyone knows who will win, this fight brings excitement and uncertainty.

This Saturday evening, you can see top boxing action when you watch Whyte vs. Povetkin streaming exclusively in the U.S. on DAZN, or watch it online in the U.K. with Sky Sports Box Office.

When is the Whyte vs. Povetkin live stream fight?

Dillian White vs. Alexander Povetkin will take place on Saturday, Aug. 22 from Matchroom Boxing Headquarters in Brentwood, England. These events are actually being held in the backyard of the home of Matchroom Boxing promoter Eddie Hearn.

How to watch Whyte vs. Povetkin live stream in the U.S.

Whyte vs. Povetkin in Matchroom Fight. Camp 4 will be broadcast live online on DAZN. It is a sports streaming service that offers an alternative to pay-per-view. In the past, Whyte vs. Povetkin might have been on a premium movie channel you didn’t really want that just repeats the same ten movies over and over, or a costly Pay-Per-View.

Now DAZN offers this fight night plus more boxing, MMA, and soccer as part of their regular subscription. DAZN also has new shows like JABS with Chris Mannix and Sergio Mora as well as The Ak & Barak Show.

DAZN is available for $20 per month, or $99 per year. Boxing fans have a lot of major events to look forward to on DAZN now that fights have returned, including Ryan Garcia vs. Luke Campbell later this fall.

All times listed are Eastern.

Dillian “The Body Snatcher” Whyte (27-1) is the WBC interim heavyweight title holder, and he’s been waiting patiently since last July for his shot at the world title. Whyte has a nearly perfect record, and his only professional career loss came in 2015 to fellow U.K. native Anthony Joshua, who is now a world heavyweight champion.

Instead of taking a warm-up fight while he waits for Tyson Fury and Deontay Wilder to complete their trilogy, Whyte is risking a lot facing another top fighter. However, that’s been his strategy so far and it’s been paying off.

Alexander Povetkin (35-2-1) is a top heavyweight title contender by any measure, and this former WBA regular heavyweight champ would love another shot at a unified world title. Povetkin has several big wins on his record, including a victory over former world champion Hasim Rahman.

His only two professional losses both came in his only two unified world title fights against Klitschko and Joshua. Despite his last fight ending in a draw, Povetkin is a dangerous opponent and a real threat to Whyte’s position as next up for a heavyweight title bout.

This fight card also includes a major undisputed championship fight in the Women’s Lightweight division, as Katie “The Bray Bomber” Taylor (15-0) defends her belts in a rematch against Delfine Persoon (44-2). Taylor is the top pound-for-pound women’s boxer, with an amazing amateur and professional career resume.

Taylor is defending five belts against Persoon, who is a former champion and top boxer in her own right. Their first fight in June of 2019 was an instant classic, and Taylor won a majority decision after ten rounds. What new will Persoon try, and will it be effective against the amazing Taylor?

How to watch Whyte vs. Povetkin live stream in the United Kingdom

If you're in the United Kingdom, you’ve got an easy way to see Whyte vs. Povetkin and Taylor vs. Persoon 2. This Matchroom Boxing Fight Camp event is available on Sky Sports Box Office.

Sky Sports Box Office is a Pay-Per-View system, but you won’t need a pay cable package. Instead you can order this fight night direct from Sky Sports for only £19.95 for the night.

Watch the Whyte vs. Povetkin live stream while you’re traveling

Travel has been locked down for so long that many people are itching to go somewhere new as soon as they can. If that means international travel, it could make it hard to keep up with all the sports you were watching at home. Geographic limitations don’t have to mean that your streaming subscriptions look like they’ve lost all their value.

How to watch Whyte vs. Povetkin live stream in Canada

Whyte vs. Povetkin in Matchroom Fight. Camp 4 will be broadcast live online on DAZN in Canada. The sports streaming service is available in The North, and it has tons of boxing and other sports available for fans to enjoy.

DAZN is available for $20 CAD per month, or $150 CAD per year, and it can be really valuable this fall with the return of the NFL. DAZN offers live NFL games in Canada as part of their service.