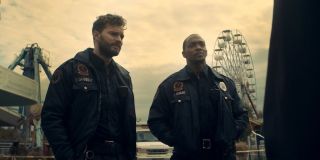 Releasing a film is a complicated game without a pandemic throwing a wrench in the works, so you can imagine what a nightmare COVID has made things for filmmakers. Once a film gets picked up for distribution, there are certain things that find themselves outside of the control of the team directly involved. That's exactly the situation that directors Justin Benson and Aaron Moorhead are facing.

Their film, Synchronic, is set to release on October 23rd. However, Benson, Moorhead, and their producer David Lawson are all of the opinion that it simply isn't safe to return to theaters just yet. The problem is, the film's release into drive-ins and traditional theaters is out of their control.

The three released a joint statement on Twitter earlier today.

Our thoughts about this year's US release of SYNCHRONIC: pic.twitter.com/A2xCpMDh0HSeptember 11, 2020

This is a tough statement to make as an indie filmmaker (or producer). While Synchronic was met to wide acclaim, some people will ignore the asterisk that comes with the box office number of a film releasing during the pandemic. It takes a lot of integrity to basically say "we made this thing we love, please wait to see it until you feel safe."

If there's a drive-in near you, you can check out Synchronic as soon as October 23rd. It's a fun, weird ride featuring Jamie Dornan and Anthony Mackie.