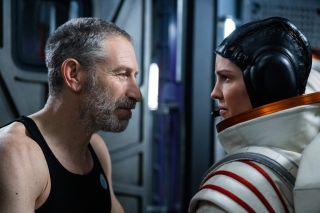 Mark Ivanir and Hilary Swank in Away on Netflix. (Image credit: Netflix)

Can you watch Away in 4K? Of course you can watch Away in 4K. That's perhaps a silly question in 2020, but it's still an important one. If you're going to invest in a new Netflix series like Away, you want to watch it in the best quality possible.

So, yes. Away is available in 4K resolution.

A few things you need to know about that, though. Because like pretty much everything these days, it's not quite that simple.

Away is a drama starring Hilary Swank as the leader of an international group of astronauts headed to Mars.

The series addresses not just the hardships on those on the journey, but the effect it has on the loved ones they've left at home, too.

Away premieres on Netflix on Sept. 4.

First is that in order to watch Away in 4K on Netflix, you'll need the appropriate subscription.

Netflix has three plans — Basic, Standard and Premium — and only Premium serves up content in 4K resolution (as well as high-dynamic range — more on that in a second).

Netflix's Premium plan runs $15.99 a month in the United States and gets you four simultaneous screens at a time and also allows you to download content on as many as four devices.

Yes, it costs more. (The "Standard" Netflix plan is $12.99 and tops out at 1080p, and the "Basic" plan runs $8.99 a month and tops out at 720p resolution.) But you're definitely getting more for your money, including the best video quality you can realistically get.

Second is that you'll need hardware that allows for 4K video. If the hardware doesn't do 4K, you won't be watching anything in 4K. For that, we recommend devices like Apple TV 4K, the Amazon Fire TV Stick 4K, the NVIDIA Shield Android TV box, and Roku Ultra.

4K resolution is the same across the board — the number of pixels involved doesn't change. But there are different flavors of HDR at play. Generally speaking, the Dolby Vision standard is considered superior to HDR10. To that end, Apple TV 4K, Amazon Fire TV Stick 4K and NVIDIA Shield all use Dolby Vision. (So, too, do the very popular 4K Roku TVs from TCL.) Roku Ultra, meanwhile, uses HDR10 as its standard for high-dynamic range.

Why is any of that important? HDR makes colors pop in a way they wouldn't otherwise. If something is available in HDR, you want it in HDR.

Simultaneously, your television also will need to handle 4K resolution and HDR. If you've bought a new set in the past year or two you're probably good to go. But if you're in the market, you want to look for 4K resolution and Dolby Vision, if at all possible.

You'll need to be able to suck down some data

Higher resolution and HDR means you'll need more data coming in — and that data will need to come in at a decent clip.

And all that means that you need to be able to support more data, and data that's coming in fast enough. If you don't have an unlimited data plan through your ISP, you might well want to consider it.