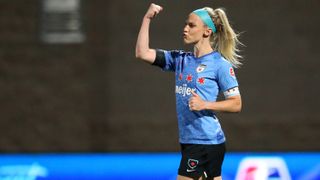 Ask someone how to watch the NWSL Challenge Cup final, and there's a good chance they'll start by asking what you're talking about. The NWSL is the National Women's Soccer League, and the Challenge Cup is the one-off tournament that the league's eight teams have played in lieu of a 2020 season, thanks to COVID-19.

After the Challenge Cup final between the Houston Dash and Chicago Red Stars, that's it for this year. No regular season. No playoffs and postseason. For one team, it was four games and done. For the two finalists, seven games — no more.

The NWSL Challenge Cup takes the place of the 2020 season. Eight teams have now been whittled down to two. The final will be played July 26 between the Houston Dash and Chicago Red Stars.

The game will be broadcast live on CBS at 12:30 p.m. Eastern, which is available on Hulu with Live TV.

That's not what anyone envisioned when the year began, of course.

And you'd also be forgiven for not realizing the Challenge Cup had been underway because save for the opening match, all the other games have been relegated to CBS All Access. It's a fine streaming service, to be sure, home to exclusives like Star Trek: Picard, and The Twilight Zone.

But it's not CBS proper, which is home to today's final match. Better late than never, we suppose, but you can't help but notice the discrepancy when the MLS Is Back Tournament (with its decidedly more obtuse name) was been on the likes of ESPN and FS1.

The tournament stared slow for U.S. Women's National Team member Julie Ertz and the Chicago Red Stars. They opened with a 2-1 loss to the Washington Spirited, played to a scoreless draw against Portland Thorns FC, then dropped a 1-0 game to the North Carolina Courage. Three straight wins followed — 1-0 over Utah Royals FC, a 4-3 shootout victory over OL Reign, and a 3-2 win over Sky Blue FC on July 26 to get the Red Stars to the final match.

The Houston Dash reached the final with the same 3-2-1 record, just in a different order. It opened the tournament with a 3-3 draw with Utah Royals FC, then beat OL Reign 2-0. Two losses then followed — Sky Blue FC beat the Dash 2-0, and Washington Spirit notched a 1-0 victory. A 3-2 shootout victory in the quarterfinals over Utah Royals and a 1-0 win over Portland Thorns set up today's game against Chicago.

How to watch the NWSL Challenge Cup final

Today's final will be broadcast on CBS at 12:30 p.m. Eastern time. That opens up a number of options for viewing.

Every major streaming service carries local CBS affiliates (double-check with your ZIP code, just in case), so you should be able to watch the game with Hulu with Live TV, YouTube TV, Sling TV, Fubo TV, or AT&T TV Now.

You also should be able to pick up your local CBS affiliate with an over-the-air antenna.