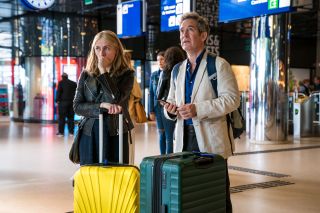 Us is an eagerly-anticipated drama coming soon to BBC1 starring Pirates of the Caribbean actor Tom Hollander.

Hollander, who’s also known for his roles in The Night Manager, Baptiste and Rev, is joined by Luther and Shetland star Saskia Reeves.

The four-part drama is an adaptation of the hit novel by David Nicholls, who also wrote Starter for Ten and One Day. Both of those were turned into movies, with Anne Hathaway starring in 2011’s One Day, and so much is expected of Us.

What’s the story in Us?

Hollander stars as Douglas Petersen, a man who gets the shock of his life when his wife Connie (Reeves) says she’s not sure she wants to be married to him anymore. But Petersen has a chance to save his marriage.

The couple are going on a grand tour of Europe and Petersen believes he can turn things around. He also hopes to improve his troubled relationship with their son Albie.

David Nicholls says: "It’s a huge thrill to see the novel come to life, and with such a wonderful cast and production team. We want to make something funny, touching and beautiful, to really explore marriage and family life, all against this incredible backdrop."

The story is billed as a comedy drama, so expect plenty of laughs as well as some tears. Interestingly as well as starring in the series, Hollander is also acting as an executive producer.

Where was Us filmed?

Us was shot all around Europe including London, Amsterdam, Venice, Barcelona and Paris. In an early release shot from the series, Hollander and Reeves can be seen in character standing outside the Louvre Museum in Paris.

When will Us be on BBC1?

Us will start on BBC1 on Sunday 20th September at 9pm.

When was Us the book published?

It was first published in 2014 and was long-listed for the prestigious Man Booker Prize. Author David Nicholls was also a screenwriter on the Benedict Cumberbatch series Patrick Melrose.