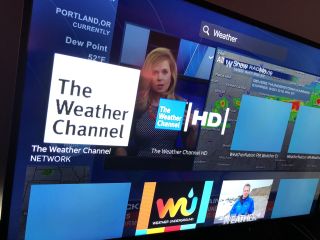 The Weather Channel is only available on a handful of streaming services in the United States.

Best answer: The Weather Channel is available on frndly TV, Fubo TV and on three plans from AT&T TV Now.

The Weather Channel streams on a scant few services

It seems crazy, but if you're looking to stream The Weather Channel live online, there only are a few services on which you'll find it —  in 2020, no less. And those services are Fubo TV, AT&T TV Now (that's the former DirecTV Now, of course), and the new frndly TV.

Fubo TV has been growing in popularity in good part because of its mix of channels. It's got many of the major networks you want, and it has a wealth of add-ons that will bring you sports you can't find anywhere else. Fubo TV also is the only place in the United States where you'll find any sports streaming in 4K resolution. All that — and dozens of channels in the lower-priced tier — for $60 a month. (You'll get a free trial, too, of course.)

AT&T TV Now is a more expensive option to stream The Weather Channel. And it's a much more expensive option, at that. Because you don't get The Weather Channel on AT&T TV Now until you pony up for their $110-a-month "Choice" option. It's also on the $124-a-month "Xtra" plan and the $135-a-month "Ultimate" plan. And if Spanish is your first language, it's also on the AT&T TV Now "Optimo Mas" Spanish-language plan, which is just $86 a month. But otherwise, that's it.

Frndly TV is relatively new and is the brainchild of a former Sling TV executive. It only features a dozen live channels — but one of those happens to be The Weather Channel. Plans start at just $5.99 a month (you'll save a bit if you choose to pay annually, though), and you'll top out at a standard-definition feed. For HD, you'll pay $7.99 a month, and you'll also get the ability to stream on two devices at once, plus you'll get unlimited DVR, with recordings kept for 30 days.

Right now, those are your only options if you're looking for a way to stream The Weather Channel.

Technically there is one other option, though it's certainly in a bit of a gray area. The Weather Channel has an official channel (think "app," really) on the Roku platform. But you'll need to have a login to a pay TV service to activate it beyond the 10-minute trial. Those services are Dish, C Spire, Spectrum, Sudden Link, Optimum and Mediacom.

Watch The Weather Channel with Chromecast or AirPlay

This is one of those gray areas (OK, it's not really a gray area), and maybe it's a little more work than it should be. But whatever.

You can stream a live feed of The Weather Channel's website in a desktop browser, and then use Apple's AirPlay or Google's Chromecast to send that tab over to a TV.

Oh, and a catch — you'll need to have a cable login (from anyone other than Comcast) to sign in first. Maybe you tripped and landed on one and lo and behold, it works. Whatever. We're not going to judge too much.

Streaming alternatives to The Weather Channel

Yeah, it's ridiculous that The Weather Channel isn't everywhere, because it really should be. But that doesn't mean there aren't alternatives.

One such option is Local Now. (For which TWC is a weather provider.) It's not as slick as TWC proper, but it does have the same sort of "Locals on the 8s" thing.