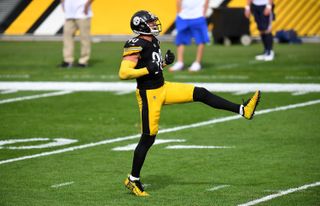 For those looking for how to watch Philadelphia Eagles at Pittsburgh Steelers online, you’ve come to the right place. Two teams representing Pennsylvania’s finest square off after unexpected circumstances put the Steeler Curtain on a bye for the week. A hobbled Eagles offense finally found some rhythm as the Steelers’ momentum was halted last week. Keep your eyes peeled for what’s expected to be a great matchup at 1:00 p.m. EST on Sunday.

Before we get into specifics, this is how you can catch the game.

How to watch the Philadelphia Eagles at Pittsburgh Steelers from anywhere

If you otherwise were all set to watch Sunday's game but have found yourself outside your usual region, a VPN might well be the way to get your game on. A Virtual Private Network tunnels all of your network traffic through a specific set of servers in a specific country, which allows you to watch the Steelers and Eagles even if you're not safely at home in the Keystone State.

The trick is that you need to be able to trust your VPN — because it'll be routing all of your internet traffic, both encrypted and unencrypted alike. For that, we've been longtime fans of ExpressVPN.

And it's a great way to watch all the spooky content this halloween season —  from anywhere in the world.View Deal

How to watch Philadelphia Eagles at Pittsburgh Steelers online:

Before we get into this, keep in mind that FOX, who’s broadcasting this game, will air it in most regions. However, certain regions are going to get local games instead. For those impacted by this, you may want to check out NFL Sunday Ticket. The West Coast isn’t likely to get this game on FOX and most of the Southeast will get Carolina vs. Atlanta on FOX instead. Check local listings to be sure.

Those who opt for Sling TV should note that Sling Blue ($29.99)  is the package that will allow access to FOX programming. If you want to create a more well-rounded streaming experience; particularly for the rest of the NFL season, we recommend subscribing for Sling Orange + Blue for $44.99 per month.

Be advised that Fubo TV offers FOX in select networks and regions, so head over to their website to find out whether or not the channel will be available where you live. Still, most regions should have access to the channel through Fubo TV.

For $54.99 per month, AT&T TV Now provides a heap of channels and offerings including the FOX channels you’ll need to keep up with the Eagles vs. Steelers matchup on Sunday.

An option that keeps viewers engaged no matter what their viewing preference is, YouTube TV offers a ton of great perks like DVR so you can still watch your favorite shows even when you can’t catch them live. It carries FOX Networks at $64.99 per month, which is a bit pricier than its competition but also offers a wider range of accessibility and a user-friendly platform.

What to watch for in the Philadelphia Eagles at Pittsburgh Steelers matchup:

Positive COVID-19 tests by the Tennessee Titans forced the Pittsburgh Steelers to delay their season, forcing the team into a Week 4 Bye that seriously screwed up the flow of their season. If the injury bug rolls around near their scheduled Week 8 bye, they won’t be able to take that week off midseason to ensure player health and safety.

Regardless, they’ll come prepared for battle against the 1-2-1 Philadelphia Eagles. For the second year in a row, this team has been struck by injuries near and far. Their receiving core has been decimated with most of their players out or on IR to start the year. This puts added pressure on their tight end Zach Ertz and running back Miles Sanders to carry a larger pass-catching load.

For the Steelers, this is a matchup to take advantage of. Philly gave up 20 points to the 49ers backup quarterbacks a week ago including 183 yards and a touchdown for star tight end George Kittle. This is a great chance for Pittsburgh to get their offseason acquisition, tight end Eric Ebron involved in the offense. He scored his first touchdown with the club in their previous game and has become more involved in the game-plan with each passing week.

Beyond that, Pittsburgh gets sophomore wide receiver Dionte Johnson back from the concussion protocol to flesh out an extremely talented wide receiver core. Despite adding star cornerback Darius Slay, one player can’t fix an entire secondary, so the Steelers will look to get multiple pass-catching options involved. That means their running backs, James Conner and Anthony McFarland Jr. could get involved in that regard.

The most important factor to take into account is the Steelers’ fantastic defense. With arguably the best pass rush in the NFL, Pittsburgh boasts depth at every defensive position. Last week, it was cornerback Mike Hilton who put together a big day with eight tackles and an interception. The week before, Defensive Player of the Year candidate T.J. Watt had 2.5 sacks and four hits on the quarterback to highlight his team’s defense.

If they can overcome this Steelers defense on Sunday, the Eagles are going to be back in business with a strong chance to win their division.