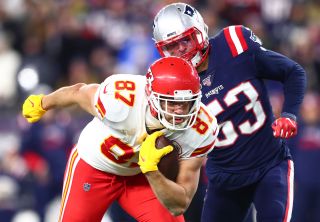 Travis Kelce of the Kansas City Chiefs was great against the New England Patriots last year. Can he repeat on Monday night? (Image credit: Photo by Adam Glanzman/Getty Images)

If you want to know to watch the New England Patriots vs. Kansas City Chiefs live stream online, you’ve come to the right place. After Patriots quarterback Cam Newton was diagnosed as positive for COVID-19, the league was forced to postpone this game until the situation became clearer. Luckily, there don’t seem to be any medical holdups, so we get two football games on Monday night!

Before we get into the specifics, let's make sure you’ve got the info you need to catch the game.

Since Monday Night Football will be on ESPN, this game is being telecasted via CBS. You can go straight to the source with a subscription to CBS All-Access to gain access to the game’s live stream. However, there are a ton of strong options that should allow you to watch a wider range of NFL football games throughout this exciting season.

With a subscription to Hulu with Live TV, you’re provided with access to CBS in addition to a wide variety of sports-minded channels. It’s catered to sports fans with customizable features that make rooting for your favorite team easier than it’s ever been. It’ll only cost you $54.99 per month, which is in the range of the industry standard and by many accounts, it’s a strong value for the product you’re receiving.

Similarly, Fubo TV has a ton of options for the NFL fan or sports fans overall — Whether it be the casual surveyor of sports or a diehard fanatic looking to catch as much as possible. There’s a wide range of channels available with packages beginning at $59.99 per month. Beyond that, there are a ton of add-ons available to flesh out your streaming experience.

Another solid route is AT&T TV Now, which carries local channels including CBS at $54.99 per month. Keep in mind that certain channels are region-locked with this service, so make sure you’ll be able to stream the game before purchasing your subscriptions. This mostly applies to blackout rules because CBS is available through this service just about everywhere.

When signing up for YouTube TV, you’re gaining access to a major variety of streaming channels including just about anything you could want as a sports fan. This includes access to a CBS feed that’ll hook you up with Monday evening’s game. It’s a bit more pricey than the competition at $64.99, but it makes up for it with some awesome features.

What to watch for in the New England Patriots vs. Kansas City Chiefs live stream online:

When the game kicks off at 7:05 p.m. EST from Arrowhead Stadium, the Patriots are going to face their toughest challenge to date. Not only do they need to battle the defending Super Bowl champions on their home turf, but they’ll have to do it without their starting quarterback. Most of the reason for this schedule reshuffling is because the aforementioned Newton tested positive for COVID-19, forcing the league to adapt.

Instead, they’ll start veteran Brian Hoyer  — An interesting decision with all signs pointing toward Jared Stidham taking over Tom Brady’s starting spot before Newton was signed. Regardless, Hoyer’s been a solid backup for a long time in this league and anyone with the trust of head coach Bill Belichick must be prepared for battle.

Meanwhile, the 3-0 Kansas City Chiefs are riding high after dominating one of the conference’s most intriguing opponents in the Baltimore Ravens last week. Quarterback Patrick Mahomes completed 31-of-41 passes last week for 385 yards and four touchdowns in the air in addition to one touchdown on the ground. Five receivers finished with at least 60 yards in the contest led by future Hall of Fame tight end Travis Kelce.

Perennially one of the best at his position, Kelce leads all tight ends in both yards and receptions through the first three games of the season. It’ll be interesting to watch him combat a New England secondary that stymied potential All-Pro tight end Darren Waller just a week ago. In Kansas City’s 23-16 victory over the Patriots last season, Kelce finished with 66 yards and the only rushing touchdown of his career.

Maybe the Chiefs will look to double-down and use Kelce that was again in this matchup.