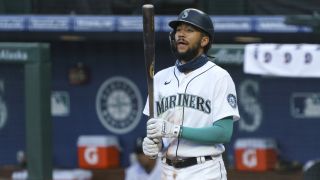 After a dominant performance in the first meeting, Seattle Mariners shortstop J.P. Crawford will try to double-down against the San Diego Padres. (Image credit: Photo by Stephen Brashear/Getty Images)

After postponing the second of four meetings between the Seattle Mariners and San Diego Padres, the two teams are set to compete at Petco Park on Thursday afternoon at 3:10 p.m. EST. Hearts are heavy given the current state of professional sports, but these Western teams from opposite conferences will carry on.

To catch the action via live stream, you’ll need a subscription to one of the premier sports streaming services in ESPN+. For a low, monthly rate of just $5.99, you can gain access to live streaming sports coverage, a large library of original content and exclusive digital content on ESPN’s website. Additionally, you can opt for a bundle package for three streaming services in one easy place with ESPN+, Disney+ and Hulu.

What to watch for in the Seattle Mariners vs. San Diego Padres:

Following the near-fatal shooting of 29-year-old Jacob Blake by Wisconsin police, the sports world is at a standstill. Once the NBA-leading Milwaukee Bucks decided not to play Game Five of the NBA’s Eastern Conference First Round matchup with the Orlando Magic, the dominoes began to fall.

First, the NBA’s three playoff games opted not to play. Shortly after, the league’s matchups were put on hold as the WNBA opted to shut down operations for the day. Six MLB franchises followed by postponing their respective games including the Bucks’ neighbors, the Milwaukee Brewers. The same can be said of both the Seattle Mariners and San Diego Padres, who opted not to play yesterday evening’s game.

It’s unclear when that game will be held, but today’s meeting between the two ballclubs is presumed to go on. In their previous meeting, the Seattle Mariners broke a seven-game winning streak by the best offensive team in baseball. ‘Slam Diego,’ as they’ve endearingly been called, is red-hot based on the breakout campaign of shortstop Fernando Tatis Jr.

Tatis struggled in that first meeting between the two teams, finishing without a hit. However, Seattle’s shortstop, J.P. Crawford put on a show himself. Crawford led the way for his Mariners team with two hits, two runs and three runs batted in during the contest. He was joined by Austin Nola and first baseman Evan White, who contributed three hits apiece.

How to watch the Seattle Mariners vs. San Diego Padres:

Your options are simple for this matchup. If you have access to local broadcasts, you’ll be set for the contest. However, those who need to live stream the game can look no further than ESPN’s reliable streaming service and digital content provider, ESPN+.

Throughout the 2020 MLB season, games are being broadcast on ESPN+ with exclusive coverage. You can subscribe today for as low at $5.99 per month and jump into the action. However, there is a better option for those looking to maximize their streaming experience.

For just $12.99 per month, which is a bargain compared to the value you’re receiving, you can subscribe to the bundle of Hulu, Disney+ and ESPN+ all together. That way, just about all of your streaming needs can be met with one easy-to-manage package.