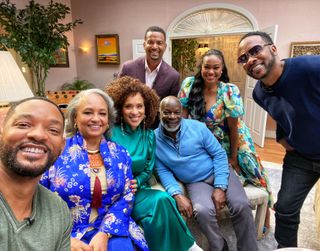 The Fresh Prince of Bel-Air reunion special is going to be one of the must-watch events on HBO Max this year, and we now have a sneak peek at the gang getting back together.

Fresh Prince — which launched the career of Will Smith and was one of the few unabashedly Black shows of that era on mainstream TV — was an undisputed hallmark of the 1990s. Playing a character named "Will Smith," who was sent to live with his auntie and uncle in Bel-Air after a couple of guys who were up to no good started making trouble in his (West Philadelphia) neighborhood, Smith was charming and funny and annoying and, well, Will Smith. It was his world, and everyone else was just living in it.

The reunion special features the original cast — Tatyana Ali, who played the young cousin Ashley Banks; her nerdy brother, Carlton, played by Alfonso Ribeiro; Karyn Parson as sister Hilary Banks; Daphne Reid, who filled in as Aunt Vivian Banks; Joseph Marcell as the butler, Jeffrey —  plus a special sit-down with Janet Hubert, who originated the Vivian character before being replaced by Reid in one of the stranger re-casts in sit-com lore. Smith's musical partner, DJ Jazzy Jeff, also takes part in the special.

Missing, of course, is the late James Avery, who played Uncle Phil, the kind-but-firm judge who helped keep the family grounded in one of the richest ZIP Codes in California. Avery died in 2013.

The Fresh Prince of Bel-Air reunion special will premiere on HBO Max around Thanksgiving. And s tarting today, all 148 episodes from all six season are now available to stream on HBO Max.