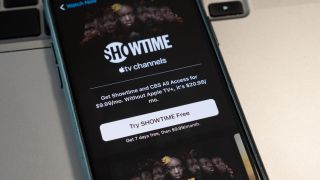 Apple TV+ is now offering a bundle subscription for CBS All Access and Showtime for just $9.99 a month. (Image credit: WhatToWatch.com)

No longer just a rumor, you can now subscribe to CBS All Access and Showtime via Apple TV+ for just $9.99 a month. (And that's after a free seven-day trial.) That'll get you the commercial-free version of CBS All Access (normally $9.99 a month unto itself) as well as the premium Showtime network.

And if you're running Family Sharing through Apple's products, you can share this subscription with up to six family members, provided they're attached to your Apple ID.

“There’s no better time to launch this special bundle,” Marc DeBevoise, ViacomCBS’s chief digital officer and ViacomCBS Digital’s president and chief executive officer, said in a press release. “CBS All Access has recently expanded to now have 20,000+ episodes and movies for fans to enjoy, plus a great slate of new content from exclusive original series, like ‘Star Trek: Discovery’ and ‘The Stand,’ to new programming from CBS like ‘Big Brother,’ ‘Love Island,’ and more.”

All of the billing and subscription info — including the ability to cancel — will be handled on Apple's end.