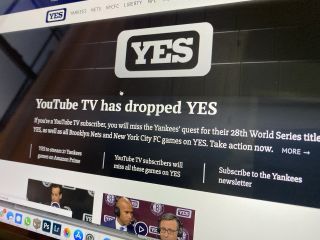 The YES Network is no longer available on YouTube TV, but can you can still get it on other services. (Image credit: CordCutters)

Best answer: After YouTube TV was forced to drop the YES Network (and some Fox Regional Sports Networks), you'll need to turn to Hulu or AT&T TV Now to stream Yankees games.

YouTube TV is out, Hulu and AT&T TV Now are in

Everything above is the important stuff. Now here comes the background. In late February 2020, YouTube TV announced that it was going to have to drop the Fox Regional Sports Networks, as well as the YES Network. (The latter, among other things, is a regional network for Yankees' fans.) The Fox RSNs are owned by Sinclair Broadcast Group, which also owns a stake in the YES Network.

Some sort of deal was reached for the Fox RSNs, but not for the YES Network. And now the only streaming services that carry them are Hulu with Live TV, and AT&T TV Now.

But there's an obvious difference between the two, if you're looking at signing up to regain the YES Network. While AT&T TV Now has the YES Network on four of its plans, the least-expensive option being the $80 "Max" plan.

Hulu With Live TV, meanwhile, has a single plan that runs $54.99 a month. (Which, coincidentally, is the same price as YouTube TV.)

So in order to watch the YES Network, you'll need one of those options.

What teams can you watch on the YES Network?

The YES Network isn't just about the New York Yankees. Sure, it broadcasts up to 128 regular-season games (when the regular season has the regular number of games, of course), but it's also so much more.

You'll also get the Brooklyn Nets on the YES Network. It's got regular-season games, as well as preseason and postseason games, plus pre- and post-game shows. There's also a weekly Nets Magazine show with highlights, player profiles and behind-the-scenes pieces, plus exclusive interviews and more.

And finally (but certainly not least) there's the New York Liberty of the WNBA.

And that's just for starters. There are more original shows on on the YES Network, and you'll find a fair amount of ACC and Big East sports, too.

Of course, that's all in a perfect world that hasn't been turned upside down by a global pandemic. Things are a little different this year, and some sports are shifting from the fall to the spring. So be sure to check the schedule.