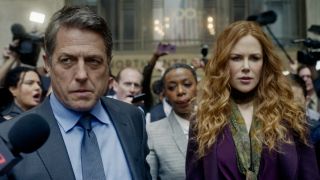 The award-winning cast of The West Wing reunites this month on HBO for A West Wing Special to Benefit When We All Vote. It’s the first time the cast has been together in 17 years, and the special will include a special staged theatrical presentation of the “Hartsfield’s Landing” episode of the show.

This month the new HBO Original limited series The Undoing, starring Nicole Kidman and Hugh Grant debuts on the streamer, and we’ll see the season finale of Lovecraft Country and the series finale of Room 104.

The Curse of Frankenstein, 1957

Dracula Has Risen from the Grave, 1969

The End: Inside The Last Days of the Obama White House, 2017

Pac-Man and the Ghostly Adventures, 2013

Race for the White House, Season 1

We Will Rise: Michelle Obama’s Mission to Educate Girls Around the World, 2016

The ABCs of Back to School: A CNN/Sesame Street Town Hall for Families, 2020

Wild Card: The Downfall Of A Radio Loudmouth (HBO)

Through a series of candid and intimate first-person interviews with Carton, the film reveals how the radio host’s secret insatiable gambling addiction, financed by an illicit ticket-broking business, brought his career to a sudden halt when he was arrested by FBI agents and charged with conspiracy, wire fraud and securities fraud on September 6, 2017.

The God of High School (Dubbed)

A West Wing Special to Benefit When We All Vote, HBO Max Original Premiere

West Wing Special to Benefit When We All Vote will feature a special theatrical stage presentation of the “Hartsfield’s Landing” episode from the show’s third season.

Based on a best-selling book by New York Times national security correspondent David E. Sanger, The Perfect Weapon explores the rise of cyber conflict as the primary way nations now compete with and sabotage one another.

537 VOTES details how the international custody battle over six-year old Elian Gonzalez triggered a political earthquake in Miami-Dade County in 2000, swaying the outcome of the presidential election. After election day, with the margin of victory hinged on Florida, George W. Bush won the presidency by a mere 537 votes.

HBO Max pays tribute to the epic origin stories of the LGBTQ+ movement with EQUAL, a masterful four-part docu-series that captures the gripping and true backstories of the leaders and unsung heroes, pre-Stonewall, who changed the course of American history through their tireless activism.

How To With John Wilson, Season 1 Premiere (HBO Original)

In a uniquely hilarious odyssey of self-discovery and cultural observation, Wilson covertly and obsessively films the lives of his fellow New Yorkers while attempting to give everyday advice on relatable topics.

The limited series follows Grace (Nicole Kidman) and Jonathan Fraser (Hugh Grant), who are living the only lives they ever wanted for themselves. Overnight, a chasm opens in their lives: a violent death and a chain of terrible revelations. Left behind in the wake of a spreading and very public disaster and horrified by the ways in which she has failed to heed her own advice, Grace must dismantle one life and create another for her child and her family.

A documentary film based on Jon Meacham’s 2018 bestseller, illuminates our present-day, fraught political reality by exploring historical challenges of the past such as the women’s suffrage movement, the incarceration of Japanese Americans, McCarthyism, and the struggle to pass Civil Rights legislation in the 1960s. All were instances in which “our better angels” battled against the forces of hatred and division that are recurring themes in American life. Directed by Katie Davison, produced by George Kunhardt and Teddy Kunhardt, executive produced by Peter Kunhardt.