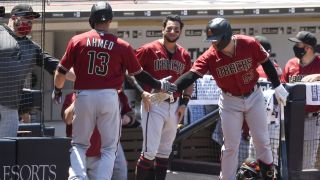 The Arizona Diamondbacks will mark their 2020 home opener against the Los Angeles Dodgers Thursday, July 30 from Chase Field in Phoenix, in what has already proved to be a strange, pandemic-altered baseball season.

Those living outside the local market for this game can catch it on ESPN+, which is a streaming service offered by the sports media giant that doesn't carry the network's flagship programming but provides some live sports and original shows. MLB.TV will also carry the game, but like ESPN+, that's only for out-of-market games.

Thursday's game won't necessarily feel like a home opener for the Diamondbacks. Due to the ongoing coronavirus pandemic, which has hit Arizona especially hard recently, the MLB is going without fans in the stands this year.

That hasn't prevented the coronavirus from affecting play. A few games were postponed in recent days after players and coaches on the Miami Marlins tested positive for COVID-19, the disease caused by the coronavirus, according to various news reports. Some commentators have even suggested the entire season is in danger, given that the outbreak emerged just a few games into an abbreviated 60-game regular season.

Given the ongoing uncertainty, you might as well watch as much baseball while you still can, right?

This matchup features the Dodgers, a team CBS Sports predicts will finish atop the National League by winning two-thirds of their games this year. After winning a NL-best 106 games last year, they snagged right fielder Mookie Betts from the Boston Red Sox, adding to a lineup that already includes the reigning NL MVP Cody Bellinger.

The Diamondbacks are no slouches, though. CBS pegged them as the fifth seed in the NL for the expanded 16-team playoffs after they added former San Francisco Giants ace Madison Bumgarner to their pitching rotation.

How to watch the Los Angeles Dodgers vs. Arizona Diamondbacks

This game will be carried on ESPN+, which comes with a $5 a month price tag. The service can be bundled with Disney+ and Hulu for $13 per month, however. So if you're looking to supplement your baseball viewing habits with the vast Disney vault and Hulu's catalog of TV shows, that might be the option for you.

Keep in mind: ESPN+ no longer comes with a free trial.And you won't be able to catch your local team (or teams) on ESPN+ due to blackout rules.

Similarly, MLB.TV will carry the game for fans outside the local area. You have a few options with that package. For the year, you'll pay $60 to stream every team's out-of-market games live or on-demand. MLB.TV is advertising three-day free trials.

If you're living in the local broadcast area, you can find the game on SportsNet LA, SNLA Spanish or Fox Sports Arizona. Check your local listings and whether your preferred streaming service carries local channels. It appears Hulu with Live TV and YouTube TV, for instance, both carry Fox Sports Arizona.