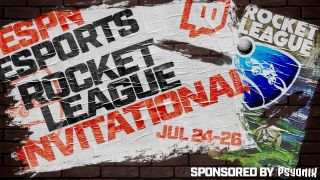 Rocket League is one of the hottest Esports around, and for good reason. It's part football (erm, soccer), part demolition derby. Only nobody gets hurt, and nobody has to clean up. Good thing, too, because there's a lot of damage in this game.

And starting this weekend, July 24 through July 26, eight Esports teams will battle it out for share of the $25,000 purse in the North American Rocket League Championship Series.

The eight teams competing in the ESPN Esports Rocket League Invitational are:

This is a round-robin style tournament, with 5-minute games, and each match is a best-of-five series. (Meaning you have to win three games to win the match.)

The top three teams in each group advance to the second round. Group winners get a bye into the semifinals. Group A plays on Friday, July 24. Group B plays on Saturday, July 25. The final bracket on Sunday, July 26, will be a single-elimination gig, and elimination matches will be a best-of-seven endeavor, meaning a team will will have to win five games.

How to watch the Rocket League Invitational

You've got a couple options when it comes to watching the Rocket League Invitational. First (and probably most popular for folks in the gaming community) will be the ESPN Esports Twitch stream.  That's available on the web, of course, as well as in any of the Twitch apps out there.

If you want to watch Twitch on your TV, you also have a few options. Unfortunately, Roku isn't one of them, despite being the biggest streaming platform in the United States. But Twitch does have apps on Apple TV, Amazon Fire TV, and on Android TV. Twitch also is simple to share to your TV using a Chromecast.