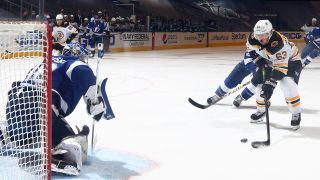 The NHL Stanley Cup Finals are roaring towards a champion, and fans are excited to stream all the action on the ice by watching Dallas Stars vs. Tampa Bay Lightning online.

Throughout the NHL Bubble, the hockey on the ice has been red hot even without the roaring of fans. Both number one seeds are out of the tournament, and so are all the Canadian teams. This Stanley Cup Finals is a Battle of the South.

How to watch the 2020 NHL Stanley Cup Playoffs live stream in the U.S.

If your only focus is watching playoff hockey, one of the best and most affordable options for you is NHL.tv and their special Playoff Pass. For only $9.99 a month, you can get live streaming NHL Playoff Hockey games for the rest of the 2020 NHL Stanley Cup Playoffs. Just beware that you might get caught by some of those nasty local blackouts if you’re rooting for a home team on the ice.

The NHL Stanley Cup Playoff series will be on NBC for up to five games, and have two games on NBCSN.

You can access all of these channels online on each of the five largest live TV streaming services.

Sling TV’s Blue Plan offers the lowest regular price among the live streaming services, and it will include your local NBC station in select markets, along with NBCSN and USA. Add on the News Extra (really, but for Hockey) to pick up CNBC and get all the playoffs for $35 a month. (See all Sling TV channels.)

YouTube TV is a great option for NHL Stanley Cup Playoffs fans who also love other sports, as they hit all the right shots for NBA and MLB games too. (See all YouTube TV channels.)

Fubo TV has the stations needed to watch the NHL Stanley Cup Playoffs live, and you can upgrade to get NHL Network for 24x7 hockey coverage even when the games are over. (See all Fubo TV channels.)

Meanwhile AT&T TV Now has plans that can get all the channels you need for hockey playoffs too.

If you're in the United Kingdom, you can still see a good amount of playoff action on the ice. The NHL Stanley Cup Finals games are being broadcast in the U.K. on the Premier Sports channels.

Premier Sports is available as part of several pay TV packages in the U.K., including Sky. However, you can sign up for a streaming only package called Premier Player Online Only for £9.99 a month.

Travel has been locked down for so long that many people are itching to go somewhere new as soon as they can. If that means international travel, it could make it hard to keep up with the sports you were watching at home.

Geographic limitations don’t have to mean that your streaming subscriptions look like they’ve lost all their value. The ability to change locations online can have many advantages for security, privacy and streaming.