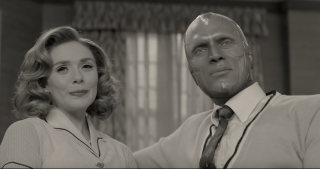 Disney released its fall programming schedule this morning, with all the usual suspects in their place. Thanks to the recently dropped trailer, we were already aware of The Mandalorian Season 2's upcoming release on October 30th. However, what we didn't expect was to see WandaVision still on their 2020 slate.

The series is set to follow Scarlet Witch (Elizabeth Olson) and the late Vision (Paul Bettany) on some strange misadventures that we've all grown to assume will be taking place in Wanda's mind. The two will also be joined by the likes of MCU favorite Darcy Lewis (Kat Dennings), and Teyonah Parris as an older version of Monica Rambeau. How will the two play into things? Honestly, we have no answers for you right now. Darcy's from Thor, Monica's from Captain Marvel, and neither have had any interaction with Wanda, Vision, or Vision's former-self, Tony Stark's trusted AI companion, Jarvis. Basically, the show's gonna be weird, and we're here for it.

Missing from Disney's 2020 schedule, however, is Falcon and the Winter Soldier. The series following Bucky (Sebastian Stan) and Sam's (Anthony Mackie) adventures as Falcon and the Winter Soldier after Steve Rogers' (Chris Evans) departure back to the 40s was originally slated to debut prior to WandaVision - August of 2020, in fact - but it looks like they're yet another COVID related casualty. It was announced back in July that the series would be delayed, but this pretty much confirms it's not hitting anytime this year.

Hopefully it also means that we'll be getting the best product we can hope for when the series does finally premiere, and that everyone on the cast and crew is remaining safe. In the meantime, bring on that WandaVision weirdness! The series is expected to debut sometime after November 12 - Disney+'s launch anniversary - to give The Mandalorian a little room to breath.