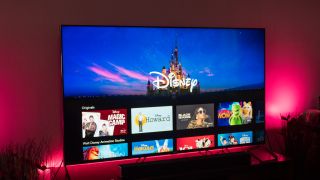 Disney+ pricing currently is available (or will be very shortly) in some 25 countries around the world. That's a small fraction of the nations on our little planet. But as Disney execs like to point out, Disney+ will reach nine of the world's 10 largest economies by the end of the year, once Latin America comes on board in November.

The Disney+ price structure is pretty simple. For the most part, you can opt to pay monthly, or you can pay for a full year all at once and save a little bit of money, effectively getting a couple months for free. There are a couple outliers where Disney+ has a deal with an existing service, like in Japan, but that's the exception to the rule.

And the Disney+ cost largely follows this scheme: In the United States, it's $6.99 a month, or $69.99 a year. In countries that use the Euro, it's 6,99 € a month, or 69,99 € annually. And so on and so forth. The amount may go up or down depending on the currency, which is normal when you're talking about prices in various countries, of course.

Here are the prices for Disney+ in the countries in which it is available. We'll update this list as more countries come online.

Note that this does not include the cost of any additional fees for Disney+ Premier Access content. That's separate per piece of content in addition to the monthly subscription fee.

Disney+ is the online streaming home for all things Disney, as well as everything in the Star Wars universe. It's also where you'll find the bulk of the Marvel catalog — both old favorites from the 1980s as well as the latest from the Marvel Cinematic Universe. Disney+ also is home to Pixar, of course, as well as NatGeo. In addition to full catalogs worth of content, Disney+ also has new exclusives like The Mandalorian and the Hamilton film.

And in the United States, you can take advantage of an epic bundle that combines Disney+, Hulu's basic service, and ESPN+ — all for $12.99 a month, which effectively gets you three services for the price of two.