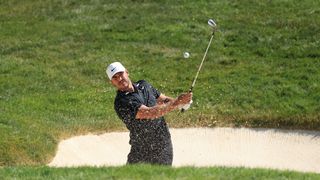 Brooks Koepka pitches out of a trap at the Memorial Tournament in July 2020. (Image credit: Andy Lyons/Getty Images)

Pro golf’s top talent will convene in Memphis this weekend for the World Golf Championship-FedEx St. Jude Invitational, but they’ll be without one of the sport’s most recognizable figures.

The tournament kicks off on The Golf Channel at 2 p.m. Eastern time Thursday, July 30 and will resume at the same time the next day. It'll continue at noon on Saturday and 12:30 p.m. Eastern Sunday, but it will switch over to CBS later in the afternoon on those days.

The Golf Channel is available on several streaming platforms with free trials and special offers, including Sling, Hulu with Live TV and YouTube TV.

While the PGA Tour’s leading golfers have already committed to playing the tournament, Tiger Woods announced Friday he would miss the event in order to prepare for the PGA Championship Aug. 6-9. Woods again hurt his back, and has been largely absent from competitive play in recent months, according to the Washington Post.

Woods has won this particular event a record eight times, including the first three times it was held in 1999, 2000 and 2001. But all of his wins came at the Firestone Country Club in Ohio. The event was moved to TPC Southwind in Memphis last year, where Brooks Koepka won by three strokes.

Disappointed to miss @WGCFedEx, but doing what I think is best to prepare me for the @PGAChampionship and upcoming FedExCup Playoffs.July 24, 2020

Koepka will return for a shot at another title, but he'll be challenged by the likes of Rory McIlroy, Jon Rahm and Justin Thomas. Even without Woods in the field, this promises to be an event packed with talent. The PGA says 45 of the top 50 players in the Official World Golf Ranking will be at TPC Southwind, which is more than any event this season.

Like other major sporting events, the WGC-FedEx St. Jude Invitational will be played without spectators due to the ongoing coronavirus pandemic.

Heading into the 3M Open in the Twin Cities, which was set to wrap Sunday, Thomas lead the FedExCup standings, with Webb Simpson and Sungjae Im coming up behind him. The cup is the PGA Tour’s season-long points competition. Winners of World Golf Championships, like the event this weekend, award 550 points to the winner.

The tournament’s first two rounds, as well as the beginning of the third and fourth rounds, will be carried on the Golf Channel. Outside of a traditional cable package, that can be found on Live TV streaming services like Sling, which offers the Golf Channel with its Blue package and the sports extra add-on for a total of $40 a month. Hulu With Live TV or FuboTV both carry the Golf Channel — each service costs $55 a month — as does YouTube TV at $65 a month.

At 2 p.m. Eastern time Saturday and Sunday, the tournament will switch over to CBS until its conclusion. You can watch your local station using an antenna on the cheap, or you can get CBS All Access, which costs $6 per month with commercials. Or you could check if your choice of another Live TV streaming service offers your local CBS station, giving you an option to watch the whole tournament in one spot.

For golf fanatics, PGA Tour Live will carry featured holes and groups throughout the event. The service comes with a $65 yearly price tag and comes with some nifty features like live play-by-play for every player. ESPN+ is also showing featured holes during the third and fourth rounds. That service costs $5 a month, or $13 per month when you pair it with Disney+ and Hulu.