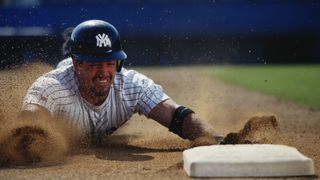 For the Boys of Summer, it’s better late than never as MLB is ready to finally have its Opening Day games. Even better, the first game of the 2020 MLB season is a fantastic match-up, with the defending World Series Champions hosting the league’s most famous and most hated franchise.

Everyone should have a chance to welcome back baseball, especially since no fans will be in the stands. You'll have a bunch of options to see the game, including a free trial of Hulu with Live TV how to watch Yankees at Nationals live stream online.

When does MLB return with Yankees at Nationals?

Yankees vs. Nationals is scheduled for 7 p.m. this Thursday, July 23 from Nationals Stadium in Washington, D.C. This is the first game of the rescheduled opening day of the 2020 MLB regular season.

The game will be broadcast on ESPN in the U.S. and BT Sport 1 in the U.K. The pitching matchup will feature the Yankees' Gerrit Cole facing the Nationals' Max Scherzer.

The New York Yankees had a fantastic regular season in 2019, finishing with a 103-59 record in 2019. The team advanced through to the American League Championship series, where they lost to the Houston Astros in six games. One of the big reasons Houston won that series was starting pitcher Gerrit Cole, who went 4-1 in the 2019 playoffs.

Now Gerrit Cole is on the Yankees roster and will be their opening day starter. The 2020 Yankees have had to deal with the effects of COVID-19. The team’s All-Star pitcher Aroldis Chapman and All-Star shortstop DJ LeMahieu both tested positive for the coronavirus, and both may miss multiple games.

Dr. Anthoy Fauci — director of the National Institute of Allergy and Infectious Diseases, a member of the coronavirus task force, and a major public face in the fight against the virus — will throw out the first pitch.

The Washington Nationals are the reigning MLB World Series Champions, and the 2019 season was quite the ride to get there. At the halfway point of last season, the Nationals were 41-40 and in third place in their division. They managed to make the postseason as a wildcard team, then went 12-5 in the postseason to win the first championship in the history of the franchise.

The 2020 Nationals have had their own unique challenges with COVID-19, as quarantine restrictions in Washington D.C. may have forced them to move games from their home stadium or face a total shutdown on any positive test. They just recently received an exemption, and are ready to start the season hosting this Opening Game.

Where can I watch Yankees vs. Nationals live stream online in the U.S.?

You can see both MLB opening day games including Yankees vs. Nationals on ESPN using any of the five of the largest live TV streaming services in the U.S. Hulu with Live TV and some of the other services offer a variety of free trials, while Sling TV’s Orange Plan offers the lowest regular price. Take a look at your options and see if there is one that is right for you.

ESPN will also broadcast a second opening day game as part of a doubleheader this same night. Sign up and stay on the live stream to watch the San Francisco Giants at the Los Angeles Dodgers.

Hulu with Live TV includes sports networks along with a huge back catalog of shows. ESPN is on Hulu, which means you can watch the Yankees vs. Nationals MLB Opening Day game on Hulu.

Sling TV is the more economical way to get ESPN. It costs about half the price of other services and still gets you access to the Yankees vs. Nationals MLB Opening Day game.

AT&T TV Now has a long list of channels in their lineup. The Plus Plan has ESPN so you can access the Yankees vs. Nationals MLB Opening Day game.

YouTube TV is one of the easiest streaming services to understand, with a single plan, a ton of channels — including ESPN for Yankees vs. Nationals MLB Opening Day game.

Where can I watch Yankees vs. Nationals live stream online in the U.K.?

UK sports fans can watch MLB games including Yankees vs. Nationals this Thursday live stream on BT Sport. You don't need a long term contract either with the BT Sport Pass. For just £25 a month, fans can see UFC Fight Night events along with Premier League football and tons of other sports.

You can watch the BT Sport coverage live stream of Yankees at Nationals starting at midnight BST. The game will stream on BT Sport 1 in the BT Sport Box Office app, available for iOS and Android, or on the BT Sport website. The apps can also be used with Google Chromecast or Apple Airplay to watch on your big screen.

BT Sport Pass offers a wide variety of options to get in the games, including UEFA Champions League as well as WWE coverage. It also includes many MLB games, including Yankees at Nationals. View Deal

The ESPN app has everything you need to watch live sports like Yankees vs. Nationals online on your TV. Your best play is to install the app, and log in with your ESPN+ account and your Live TV streaming credentials before first pitch.

If you need help, we can guide you through how to login and watch ESPN+ on your TV. The ESPN app is available on the major streaming platforms and game consoles including iOS and Android devices, Apple TV, Android TV, Chromecast, Fire TV, Roku, Samsung Smart TVs, PlayStation 4 and Xbox One.