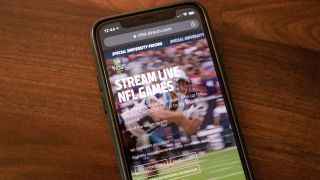 NFL Sunday Ticket is available at a special low price for students in college and university. (Image credit: WhatToWatch.com)

But if you're in college or university, you're in luck.

The NFL Sunday Ticket student price is just $24.99 a month for four months, or $99.96 for the season. And that gets you the same as the NFL Sunday Ticket Max package, which includes NFL Red Zone and Fantasy Zone. And for another $50 you can opt to add NFL Game Pass, which gives you replays of all the games.

There are some caveats, of course. First is that you have to be a student with a valid .edu email address. (They'll use a service to check your eligibility.) Second is that not every school is supported, though the list is pretty extensive. (It's quick and easy to view the page source and search for your school.) And third is that you're limited to just one game at a time, so don't be expecting to share this with anyone.

One other caveat worth mentioning — and this is true across the board for NFL Sunday Ticket — is that you're limited to out-of-market games. So if football is happening across the street (or across town) from your school, there's a good chance you won't actually be able to stream the game this way.

Once the season is over, you'll automatically be renewed for the following season, so be sure to keep an eye on that if you've decided once was enough. You also can cancel and get a refund at any point before the start of the season.