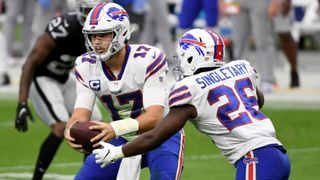 Quarterback Josh Allen of the Buffalo Bills hands the ball off to running back Devin Singletary in a game against the Las Vegas Raiders on October 4, 2020 in Las Vegas. He'll look to keep his team undefeated Tuesday. (Image credit: Ethan Miller/Getty Images)

Football fans will surely be curious about how to watch the Buffalo Bills at the Tennessee Titans this week, given the unusual nature of the game.

CBS will broadcast this game between Titans and the Bills on Tuesday, Oct. 13, at 7 p.m. Eastern time at Nissan Stadium in Nashville. You read that right. This game is being played on a Tuesday night, due to an outbreak of the Covid-19 among the Tennessee Titans.

If you've cut the cord and are going without cable or satellite, you still have options for watching CBS, since major streaming services offer local channels. Let's take a look.

How to watch the Bills at Titans from anywhere

If you want to watch Tuesday night's game match between Buffalo and Tennessee but you're outside your usual viewing area and unable to use your usual service, a VPN might well get things done for you. Essentially, a virtual private network can route all your traffic through a specific country. So if you're usually in the U.S. and otherwise would have watched the game on CBS but you're abroad, you can use a VPN to make it look like your computer is back at home.

How to watch the Bills at Titans

You already caught the Thursday, Sunday and Monday NFL games. Now the pandemic has prompted a fourth day of professional football. Luckily for you, there will be several places to watch the Bills at the Titans.

Hulu with Live TV and AT&T TV Now both carry local channels and cost $55 per month.

YouTube TV and FuboTV, which each cost $65 per month, also include local channels but also offer add-ons that include NFL Redzone from NFL Network for an extra $11 per month. So if you're really into football, and those odds are good if you're watching the NFL on a Tuesday, those might be good options for you.

Sling offers a "Better Locals Bundle" that costs $99 when you prepay for three months of its streaming service. Sling comes in Blue and Orange packages, each with their own channel lineups, for $30 per month each. Or you could get both for $45 per month. You could also get NFL Redzone for an extra $10 per month. as part of an add-on.

Be sure to double-check that your preferred streaming service carries CBS in your area. Each service offers a free trial and can be used on popular devices like Roku, Apple TV and Amazon Fire TV. See our guides for Sling, Hulu With Live TV, AT&T TV Now, YouTube TV, and FuboTV.

Otherwise, you could also sign up for CBS All Access, the network's streaming service. That includes plenty of classic and new shows, as well as your local CBS station. That costs $6 per month and comes with a free trial.

The Bills (4-0) and Titans (3-0) come into this game undefeated look to keep it that way. The Titans, however, are facing some hurdles due to a coronavirus outbreak that has sidelined some players and kept them from adequately preparing. It's a tough break for a team that was one win short of making the Super Bowl despite a 9-7 regular season record.

The Titans are led by quarterback Ryan Tannehill as well as running back Derrick Henry.

Meanwhile, the Bills are finally rid of Tom Brady in New England, giving them a better shot of winning the AFC East. And they're off to a solid start this year behind the young gunslinger Josh Allen, who is having a stellar third season as an NFL quarterback. He has tossed 12 touchdowns and just one interception in the first four games of the season.

The Bills have won the last three matchups against the Titans, but they decided by a combined nine points. If the unusual nature of this game doesn't shake things up too badly, we could be in for another close matchup in Nashville.