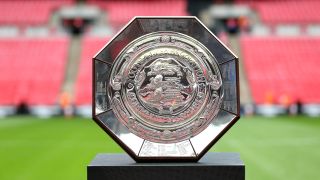 The Community Shield will go to either Arsenal or Liverpool on Aug. 29. (Image credit: Getty Images)

Two teams who can play attractive football and have plenty of goals in them, with stars such as Mo Salah, Sadio Mane, Roberto Firmino, Pierre-Emerick Aubameyang and Alexandre Lacazette.

The game has the potential to be excellent viewing. Where can you watch the game and when? Let us give you the information.

Where can you watch Arsenal vs. Liverpool in the United States?

In the United States, you'll be able to watch the game on ESPN+. That's the dedicated streaming service from the eponymous sports network, and it's home to all kinds of games and events that traditional TV just doesn't have room to fit in.

Or if you're really serious about your sports and entertainment, check out the epic bundle that gets you ESPN+, Hulu and Disney+ for just $12.99 a month, effectively getting you the three services for the price of two.

How to watch Arsenal vs. Liverpool in Canada

If you're in Canada and want to watch the Community Shield match between Arsenal and Liverpool, you'll need to do so on Sportsnet.

Some background on the teams

Liverpool was the dominant force last season, and no doubt will be tough to beat again this season. Currently, there has only been one new signing which is the left-back Kostas Tsimikas, who will provide cover for Andrew Robertson. Leaving the club so far has been defender, Dejan Lovren who left for Zenit St Petersburg and midfielder, Adam Lallana who has joined Brighton Hove Albion. Liverpool is heavily linked with Bayern Munich’s playmaking midfielder, Thiago Alcantara. If the move does indeed materialise, then he would give Liverpool a possession type midfielder who controls the tempo of a game, but how he would cope with the physical demands of the Premier League will be interesting to see.

Arsenal will be looking to improve on their league form this season. Arteta is still building his side and his philosophy of how he wants them to play. There is no doubt they have several technical footballers in their squad but do they have the right balance and team ethic to be more competitive week in and week out in League football.

Currently, Arsenal has brought in Willian from Chelsea on a free transfer. The 32-year-old Brazilian is an excellent player and another highly technical player who gives options in several attacking positions. The London based side also signed permanent deals with two players who joined in January on loan deals. Those two being Pablo Mari, a central defender and full-back, Cedric Soares. In terms of players leaving then as writing this, it appears Ainsley Maitland-Niles is on the verge of a move to Wolverhampton Wanderers as well as rumours on other players such as Sead Kolasinac, Mesut Ozil and Daniel Ceballos. Time will tell, but you do feel Arteta will want to make some changes in his current squad so could be a busy summer.

A difficult game to predict. Will the two sides try different players and formations/tactics for this game and treat as a pre-season friendly? It is hard to predict the two sides, but you would think there will be a bit of a mixture of first-team players and given opportunities to fringe players and youngsters looking to make a breakthrough. Players such as Liverpool’s Harvey Elliott, Neco Williams and Rhian Brewster and Arsenal’s Bukayo Saka and Reiss Nelson could well be given extended game time on this stage at Wembley Stadium on Saturday. It should be a great watch.

My scoreline prediction is: