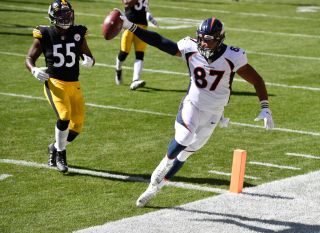 You’ve come to the right place if you want to know how to watch the Denver Broncos vs. New York Jets live stream online. This is the final week of Thursday Night Football that’ll be aired exclusively by the NFL Network, but we’ll get you up to date on those changes when they take place next week.

A clash of two franchises looking to establish names for themselves this season, the Denver Broncos and New York Jets each needed a matchup like this one. Even though these teams are both poor compared with the NFL’s elite, they make for a solid matchup going against each other.

There’s a chance for high intensity in this one, so let’s get you set up with access to a Thursday Night Football live stream.

How to watch the Denver Broncos vs. New York Jets live from anywhere

If you're not in your usual haunt for tonight's game but still want check out every play, you've got options. And good options, at that.

A VPN may be just what you need to watch the game from wherever it is you call home in these crazy times. Virtual Private Networks allow you to route all of your network traffic through servers in a specific country — in this case, the United States — even if your computer isn't physically still in the United States. Once that's done, you can go ahead and watch the Broncos and Jets just as you would have before.

The one catch is that you need to be able to trust your VPN, because you're sending all your network traffic — encrypted and unencrypted alike — through it.

For our part, we're big fans of ExpressVPN. It's safe, it's secure, and it's super easy to use. And perhaps most important — it's affordable.

How to watch the Denver Broncos vs. New York Jets live stream online:

There is a variety of options available to watch the Denver Broncos vs. New York Jets live stream online beginning with Sling TV. For only $29.99 per month, you can subscribe to Sling Blue, which offers NFL Network in addition to dozens of high-quality television streaming channels. However, this plan doesn’t include essentials like ESPN, which is exclusive to Sling Orange. For the best of both worlds, you’ll need to consider the Sling Orange Plus Blue plan for $44.99 per month.

If that doesn’t work for you, Fubo TV has the NFL Network as part of many of its deals. There’s a baseline of great plans beginning at $59.99 per month that includes NFL Network. You can work your way up with add-ons that customize Fubo TV’s offerings based on your needs to make sure you’ve got a complete viewing experience.

Another reliable option that’s compatible with most devices is YouTube TV. A subscription, which costs $64.99 per month, provides a wide array of channels, including NFL Network, that makes television live streaming more accessible for internet-minded individuals. YouTube TV costs a little bit more than the competition, but the quality is worth the price.

When does the Denver Broncos vs. New York Jets game start?

Thursday Night Football kicks off at 8:20 p.m. EST live from MetLife Stadium in East Rutherford, NJ. Interestingly enough, MetLife is home to both New York-based teams despite residing across the Hudson River. There aren’t expected to be any weather-based issues to note with temperatures projected between the low 70s and mid-60s tomorrow evening.

Perfect weather for a football game.

What to watch for in the Denver Broncos vs. New York Jets matchup:

Neither of these teams should be particularly proud of their start to the season, but it’s nearly impossible not to rack up a few wins along the way. For the Denver Broncos, this hasn’t been a matter of talent — It’s a matter of health. From as early as training camp, star players on both sides of the team have dropped like flies. That includes linebacker Von Miller, who’s expected to miss the entire season with an injury suffered on the last play of training camp.

Most recently, a Denver team that prides itself on defense lost defensive lineman Jurrell Casey, who was traded to the Broncos during the offseason. He’s not the only player — Star cornerback A.J. Bouye, their other major offseason addition, is on the injured reserve with a shoulder injury.

One bright spot for them to lean on is star tight end Noah Fant, whose been incredible to start his season. The second-year breakout candidate’s 184 yards through three games ranks third at the position. He’s caught two-thirds of his passes so far including two touchdowns on the season. No matter who’s under center for this team, Fant is a reliable contributor.

Meanwhile, New York Jets fans continue to be plagued by their team’s poor decision-making. For over a year now, the fanbase has been clamoring to fire head coach Adam Gase and there are rumblings that it could happen soon if the Jets continue to lose. It’s been a battle for years now with Gase leaving a path of destruction behind him with multiple organizations before landing this job.

Despite Gase’s best efforts, there are fun aspects of this team to be intrigued by. Wide receiver Braxton Berrios was called on after injuries ravaged the Jets’ wide receiving core. Through two games, the former New Engeland Patriots draft selection has 123 yards and two touchdowns on 10-of-12 catches. There seems to be an interesting connection between him and quarterback Sam Darnold. That may be a point of interest for Jets fans moving forward.