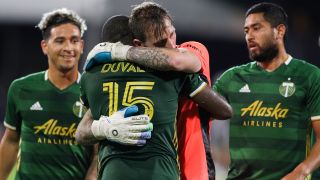 Portland Timbers goalkeeper Steve Clark and defender Chris Duvall embrace after defeating the Philadelphia Union in the MLS is Back tournament on August 5, 2020. The Timbers went on to win the tournament, and are near the top of the western conference. (Image credit: Joe Petro/Icon Sportswire via Getty Images)

Major League Soccer fans looking for how to watch the Seattle Sounders vs. Portland Timbers will probably already be familiar with where to find this game between west coast rivals given how often they play each other, but we'll break it down anyway.

The Timbers will host the Western Conference-leading Sounders in Portland at 10 p.m. Eastern time Wednesday, Sept. 23. For much of the country, the game can be found on ESPN+, the streaming supplement to the sports broadcast behemoth.

ESPN+ comes with a pretty light price tag and can be bundled with other streaming services. Local channels in Portland and Seattle will be carrying the game as well.

How to watch the Seattle Sounders vs. Portland Timbers

ESPN+ will carry this game for out-of-market viewers. That service costs just $6 per month as a standalone, and your subscription gives you access to other live sports (such as out-of-market Major League Baseball games) and original ESPN content. Just don't expect to find things like Monday Night Football there. You'll need regular ESPN for that.

You can also bundle ESPN+ with Disney+ and Hulu for just $13 a month. That means you can turn to a new or classic Disney movie or your favorite show if your team happens to be losing and you can't stand to watch anymore. I know this feeling well.

Here's our guide on watching ESPN+ on your TV.

ESPN+ can be streamed on many popular devices, such as Roku, Apple TV and Amazon Fire TV.

Local channels will be carrying this game as well. In Seattle, JOEtv and Amazon Prime Video will broadcast the game. You get Amazon's streaming service when you sign up for its $119 Prime subscription, which includes free two-day shipping. Or you can pay $9 per month for streaming alone.

These two teams have become more familiar with each other recently. Wednesday will mark the third matchup between them in the past month.

Fresh off their championship in the MLS is Back Tournament in the pandemic-resistant bubble, Portland fell to Seattle 3-0 in late August before roaring back with a 2-1 victory on Sept. 6.

It turns out the road team may actually have the advantage in this rivalry. The home team has lost the last six matchups between the Sounders and Timbers, according to  the Sounders' beat writer. Home team advantage is probably not much of a factor anymore now that the coronavirus has kept fans out of the stands.

Seattle remains atop the Western Conference standings at 6-2-3, while Portland sits in fifth place at 5-4-3. Both are comfortably on pace for a spot in the playoffs, which begin Nov. 20. Eighteen teams will advance in this coronavirus-altered season.

The Timbers have struggled a bit since their midseason tournament victory, but they put up six goals in a win against the San Jose Earthquakes Saturday, so maybe they're back on track. A win against Seattle may prove they're still a formidable team.