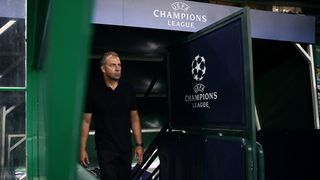 Bayern Munich vs. Paris Saint-Germain. It's come down to this.

The 2019-20 UEFA Champions League season — which began way back on June 11, 2019 — comes to its conclusion more than 14 months later. Bayern Munich, Champions of Germany, against Paris Saint-Germain, the Champions of France. Both sides also won their domestic Cup competitions, so one of these teams will win be treble winners.

Who will come out on top, and where can this game be seen on Aug. 23?

Bayern vs. PSG: How to watch the game in the United States

Bayern vs. PSG is scheduled for 3 p.m. Eastern on Aug. 23. The match will be shown on CBS Sports Network, which is available on Hulu With Live TV, YouTube TV, AT&T TV Now, and FuboTV.

Or you can stream the game directly on CBS All Access.

How to watch Bayern vs. PSG from anywhere

Bayern vs. PSG: Some background on the teams

Bayern Munich unquestionably has been the dominant side throughout this prolonged tournament. They have registered ten straight wins with some of those wins having emphatic scorelines. They scored ten against Tottenham, nine against Red Star, eight against Barcelona, seven against Chelsea and five against Olympiacos. All the listed games bar one were over two legs with the exception being the remarkable eight scored in one game against Barcelona. As an attacking force, they are a formidable unit with goals coming from many sources including striker Robert Lewdanowski. He has 14 so far in this tournament, Thomas Muller, Ivan Perisic and Serge Gnabry to name a few. In the case of Gnabry here is a player that had a few outings with Arsenal but was released, went on loan to West Brom and could not get in their side. Now he finds himself starting in a Champions League final a remarkable turnaround of fortunes. For Bayern Munich, they last won the tournament in 2013, and they will be going on Sunday for their sixth European Cup/Champions League Title which would tie Liverpool’s number of wins and leave them behind only AC Milan and Real Madrid.

Paris Saint-Germain will be playing in their first European Cup/Champions League final in their history. The side from Paris for years have been striving to reach the final supported by their owners, Qatar Sports Investments and the financial clout they have. In getting to the final PSG have beaten teams such as Real Madrid, Borussia Dortmund, Atalanta and Red Bull Leipzig. Even though they have not been in cruise control like their opponents, they have been some excellent performances along the way and what seems to be more of a team ethic than in previous years. Finally, they are in the final, now can they raise the trophy aloft at the end?

Bayern vs. PSG: The latest on the teams

German defender, Jerome Boateng went off in the semi-final with a muscle injury and was replaced by Niklas Sule. Boateng is expected to make the final, but if he does not then Sule or fit again, Benjamin Pavard who also came on as a late replacement in the semi-final could well start.  Pavard has been outstanding this season but has recently missed a few games so to come back in for this game may be a tough ask but only head coach, Hansi Flick knows if he is ready or not if required.

PSG have doubts over the keeper, Keylor Navas who missed the semi-final with a torn hamstring. Navas is close to being ready, but if he misses out, Sergio Rico, who started the semi-final will start the final. PSG had a few players in the semi-final who came on as late substitutes working their way back from injuries. Players such as defender, Thiago Silva and midfielder, Marco Verratti. Defender, Layvin Kurzawa, another injury absentee, made the bench for the semi-final but did not play any part, so you would think that it is highly unlikely he will be in the starting line-up for the final.

Bayern Munich will look to dominate possession as they have done to most in Europe this season. Thiago Alcantra controls the tempo in midfield, linking play up and when having so much of the ball the full-backs Joshua Kimmich and Alphonso Davies play as wingers predominantly. With attackers such as Muller, Gnabry and Lewdanowski and other options off the bench such as Kingsley Coman and Philippe Coutinho, they are blessed with stars who can create and score goals at will at times. PSG, no doubt know they have to defend resolutely, and when they have chances, they have to take them.

In PSG’s case, they also have some dangerous attackers. Neymar in the last two rounds has been outstanding. Angel Di Maria in the semi-final was excellent and Kylian Mbappe even though not fully firing after his recent injury, showed signs he is not too far away. With Bayern Munich, they will have plenty of possession, but if PSG can win the ball back in transition, this is where they a real chance. They have to be brave and try and leave Mbappe and Di Maria in advanced positions and quickly get the ball to them. With Kimmichh and Davies in forward-looking areas, there will be spaces left as I don’t feel it is the strongest attributes of Thiago or Leon Goretzka to fill spaces left with a defensive mindset. Mbappe on Davies side of the pitch, in particular, could have a lot of joy. It will be a great battle to see if Davies can force Mbappe back defending, or can PSG get enough of the ball and get it to Mbappe and force Davies to play as a left-sided defender rather than as a winger?

The team selection for PSG there is in my view, a big decision to make in midfield. Verratti is when fit, their best midfielder, do they risk starting him and try to get him disrupting Goretzka and Thiago? The three PSG chose is going to be interesting to keep an eye out for. In addition to Verratti, there is Leandro Paredes, Ander Herrera, Marquinhos and Idrissa Gana Gueye to choose from. If all fit then I would pick Verratti, Marquinhos and Herrera as I feel they all have the ability to influence play when in possession but can work as a group to stop Bayern Munich playing. All are tenacious and energetic and can rattle the German Champions.

There is no doubt that Bayern Munich is the favourites, but PSG has a real chance. Even when the German side destroyed Barcelona and comprehensively beat Lyon, both sides had real chances to score a few goals each. PSG have to be clinical though when given opportunities, can they do that on the biggest European club stage of them all and finally win the Champions League?

My scoreline prediction is: