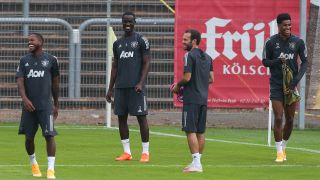 Sevilla vs. Manchester United brings us two top teams today in the of two UEFA Europa League semifinals. That's the second level of Euro competition, a step below the Champions League, but with loads of teams that you know — and that you know are capable of some perfectly incredible football.

And today that brings Pogba and Man U up against Diego Carlos and Sevilla.

The game will be streamed in the United States on CBS All Access, starting at 2:15 p.m. Eastern time.

Sevilla wrapped up its club play on July 19th, finishing fourth in Spain's top level, La Liga. It's won four of its last five games overall, with a lone draw. Man U, meanwhile, finished third in the English Premier League (or second if you consider that nobody had a chance of catching Liverpool) and wrapped up that season on July 26. Man U has won three of its last five games, with a loss and a draw tucked in there as well.

Man U made it to the Champions League quarterfinals in 2019 before bowing out to Barcelona in the quarterfinals. Sevilla fell from the Europa League with a loss in the Round of 16 to Czech team Slavia Praha.

Sevilla and Man U haven't faced each other since the 2018 Champions League. Their first match in February of that year ended with a scoreless draw, and Sevilla gained the edge a month later with a 2-1 win.

Sevilla hasn't lost a game in its last 19 competitions across all leagues, which is as much of a peak as anyone can hope for. Man U barely made its way out of the Europa quarterfinals, though, so we'll see what happens with this matchup.

The winner of today's game will face either Inter or Shakhtar in the Europa League final on Aug. 21 in Cologne.

How to watch Manchester United vs. Sevilla from anywhere

If you're in the U.S., you're good to go with CBS All Access. But if you've found yourself away from your home country and still want to watch today's semifinal between Manchester United and Sevilla, a good VPN is the way to go.

A VPN allows you to route all your network traffic through a specific country, is it's as if your computer was still in, say, Spain, even if you're actually in England. So you can continue to stream the game just as you would before.

The catch with a VPN is that you need to use a provider you can trust. Fortunately, we have one we can recommend.

How to watch Sevilla vs. Man U in the United States

Today's game between Sevilla and Manchester United is on CBS All Access in the United States, starting at 2:15 p.m. Eastern time.

It'll also be available in Spanish on Univision Deportes, which is now known as TUDN.

How to watch Sevilla vs. Man U in the United Kingdom

If you're in the UK, the Europa League semifinal will be available on BT Sport 1 starting at 20:00.