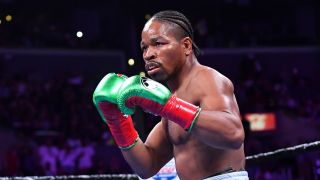 Porter vs. Formella is at the center of this weekend’s PBC Fight Night event, but it’s not the last fight of the night. This event has an interesting setup, with the Main Card on Fox first and then extra fights after on FS1. Still a Main Event is the biggest fight and this title eliminator pits two former champions against each other with the winner hoping for a shot at Spence.

This Saturday night, you can see top boxing action when you watch Porter vs. Formella streaming exclusively in the U.S. on Fox and FS1. These fights are available on several Live TV streaming services, including Sling TV.

When is the Porter vs. Formella live stream fight?

Shawn Porter vs. Sebastian Formella in Fox PBC Fight Night will take place on Saturday, Aug. 22 from the Microsoft Theater in Los Angeles. There will be no fans allowed in the event, which is being held behind closed doors.

Fox will have the live stream broadcast of the Main Card starting at 8 p.m. Eastern. The Main Event of Porter vs. Formella should start at approximately 9:15 p.m. Eastern. After the main event, there will be extra bouts on FS1 Fight Night starting at 10 p.m.

How to watch Porter vs. Formella live stream in the U.S.

Porter vs. Formella in PBC Fight Night will be broadcast live online on five of the largest live TV streaming services. Each service will have what you need to watch both the Main Card on Fox and the extra fights on FS1.

Sling TV offers the lowest regular price among the live streaming services, and it includes live Fox local stations and FS1 on the Blue Plan. Hulu with Live TV and some of the other services offer a variety of free trials.

YouTube TV has local Fox stations, FS1 and one of the deepest rosters of sports channels of any live TV streaming service. Fubo TV includes Fox and FS1 in their base package, and this service has been sports focused from the start.

Meanwhile AT&T TV Now has plans that include both Fox and FS1, but for big sports fans you can also step up to include tons of regional sports networks to watch your local teams play other sports too.

All times listed are Eastern.

“Showtime” Shawn Porter (30-3-1) is a two-time welterweight champion, and he’d love another chance to reign for a third time. Porter won his first world title in 2013 when he captured the IBF welterweight belt, and then he beat Danny Garcia in 2018 to win the WBC championship. This Saturday’s fight is part of a WBC/IBF title eliminator, which is basically a tournament to determine who gets to challenge the current champion.

That current champion is Errol Spence Jr., and he fought Porter in late 2019 in what many consider one of the best fights of that year. Spence won by a split decision, with one judge scoring Porter the winner and the other two awarding it to Spence. A rematch would be highly anticipated.

Sebastian Formella (22-0) is the IBO welterweight champion, but this German boxer has yet to get a shot at a major world championship. He is undefeated but not well known on the world stage, as this will be only his second fight outside of Germany. This is a huge opportunity for him to score an upset in the biggest fight of his career, and maybe set up a shot at one of the greats in the sport next.

Watch the Porter vs. Formella live stream while you’re traveling

Travel has been locked down for so long that many people are itching to go somewhere new as soon as they can. If that means international travel, it could make it hard to keep up with all the sports you were watching at home. Geographic limitations don’t have to mean that your streaming subscriptions look like they’ve lost all their value. That goes double when the boxing match you want to see isn’t available in the country you are visiting.