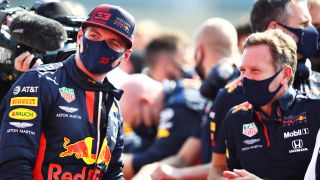 F1 sees the Spanish Grand Prix do its things today, northeast of Barcelona.

The race will be broadcast Sunday at 9:05 a.m. Eastern time from the Circuit de Barcelona-Catalunya in Montmeló, Catalonia, Spain. ESPN will broadcast the race for early-bird race fans in the United States. And luckily for those forgoing cable or satellite bills, the worldwide leader in sports can be found on major streaming platforms.

Last week saw a surprise victory for Max Verstappen and his Red Bull Racing Honda in England. The 22-year-old Dutchman snapped Lewis Hamilton's three-race winning streak. Hamilton remains comfortably atop the standings, however, with Verstappen trailing him in second place by 30 points.

Hamilton won last year's race at the Spanish track on the British driver's way to his sixth world championship.

This weekend's race will also see the return of Sergio Perez, who missed two weeks because he tested positive for COVID-19. He has since tested negative, according to ESPN. Despite missing time, the Mexican driver remains eighth in the standings heading into the Spanish Grand Prix.

The race track is a familiar one for drivers. It was built as part of the 1992 Olympic games in Barcelona, and F1 officials say it has a "good mix of high- and low-speed corners."

Here's one of the sport's drivers guiding viewers through the track.

How to watch the F1 Spanish Grand Prix live stream in the U.S.

The race will be shown on ESPN, which is carried by major streaming platforms.

For $55 per month, you can find it on Hulu With Live TV or AT&T TV Now. Otherwise, FuboTV and YouTube TV, which each cost $65 per month, both carry ESPN.

Sling carries ESPN on its Orange package for $30 per month, or you could pair it with Sling Blue for $45 per month. Sports fans may want to opt for the latter option, since Blue carries channels like FS1 and NBCSN.

All of those streaming options offer a free trial, and they're compatible with popular platforms like Roku and Amazon Fire TV.

Devoted F1 fans may want to consider the sport's own streaming service, F1 TV Pro. At $80 a year or $10 per month, the service allows users to stream all track sessions for every grand prix and offers access to driver onboard cameras and team radios. It also includes live streams of F2, F3 and Porsche Supercup events. F1 TV Pro offers a one-week free trial.

How to watch F1 Spanish Grand Prix in the U.K.

Across the pond, the race will be carried on Sky Sports, specifically its main event and F1 channels starting at 2:05 p.m. local time.

You can get a bundle that includes Sky TV, Sky Sports and Sky Cinema for £46 per month for 18 months. That package includes its F1 channel, which also shows F2, F3 and IndyCar races.