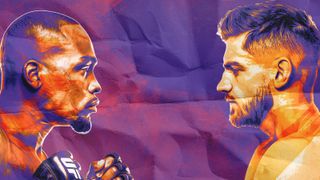 UFC is back and stateside again after weeks of fights beachside at Fight Island. They return to their APEX facility in Sin City with a fight between two top fighters in a very busy Middleweight division.

This weekend an undefeated upstart will challenge an experienced warrior who has faced the likes of Anderson Silva, Lyoto Machida, Ronaldo Souza and current champion Israel Adesanya. You can see if experience or youth wins the day by watching Brunson vs. Shahbazyan in UFC Fight Night exclusively on ESPN Plus (ESPN+).

When is UFC Fight Night: Brunson vs. Shahbazyan?

UFC Fight Night: Brunson vs. Shahbazyan is broadcasting on Saturday, Aug. 1 from the UFC APEX facility in Las Vegas. This Fight Night Main Card is available in the U.S. exclusively on ESPN+, with the Prelims starting at 7 p.m. Eastern time and the Main Card begins at 9 p.m. Eastern.

The U.K. broadcast will be on BT Sport, with the Prelims starting at Midnight British time and the Main Card beginning at 2 a.m. British time.

Derek Brunson (20-7) is the eighth ranked middleweight contender, and he’s had an active career filled with big name fights but no UFC title fights. Bruson has been inactive for almost a full year, as his last fight was a win over Ian Heinisch last August. The break was part contractual and part COVID, as he signed a new deal with the promotion in December.

Learn how to watch UFC 252 live stream from anywhere

Bruson was then scheduled to fight in March and April until those dates were postponed. Now he is back, and fighting another top ten ranked middleweight. With Kelvin Gastelum and Darren Till both taking recent losses, a win here could push Bruson to the brink of the top five.

Edmen “The Golden Boy” Shahbazyan (11-0) is the ninth ranked UFC Men’s middleweight fighter, and he’s been on a tear up the rankings as he continues his undefeated pro career. He is an alumni of Dana White’s Contender Series, and he fought on the finale of The Ultimate Fighter 28 before making the jump into the promotion full time.

Shahbazyan hasn’t had a fight get out of the first round since joining the UFC, knocking out Charles Byrd and Brad Tavares, and submitting Jack Marshman. If he makes as quick work of Brunson as he did those other fighters, it will be Shahbazyan who can start thinking about a title shot in his future.

Where can I watch UFC Fight Night: Brunson vs. Shahbazyan in the U.S.?

You can watch UFC Fight Night: Brunson vs. Shahbazyan as part of ESPN+. A subscription to the sports streaming service will get you the entire event, including the main event between Brunson and Shahbazyan. ESPN+ includes lots of live sports, when live sports are in action of course. They also have the full 30 for 30 documentary series back catalog, along with classic sports. You can see a large collection of past UFC fights on ESPN+ too.

Where can I watch Brunson vs. Shahbazyan in the U.K.?

UK fight fans can watch UFC Fight Night Brunson vs. Shahbazyan live stream on BT Sport. You don't need a long term contract either with the BT Sport Pass. For just £25 a month, fans can see UFC Fight Night events along with Premier League football and tons of other sports.

You can watch the BT Sport coverage live stream of Brunson vs. Shahbazyan starting at 10 p.m. BST. The event will stream in the BT Sport Box Office app, available for iOS and Android, or on the BT Sport website. The apps can also be used with Google Chromecast or Apple Airplay to watch on your big screen.

BT Sport Pass offers a wide variety of options to get in the games, including UEFA Champions League as well as WWE coverage. It also includes UFC events, so it will show Brunson vs. Shahbazyan.View Deal

Here's the schedule for this UFC Fight Night airing on ESPN+. (All time Eastern)

The full fight card, as always subject to change, is as follows:

How to watch UFC Fight Night: Brunson vs. Shahbazyan

UFC FIght Night: Brunson vs. Shahbazyan will be available to stream in the ESPN app. You’ll use the same app for this event, whether you are watching using ESPN+ or a Live TV streaming login for the ESPN channel.

ESPN+ is the exclusive home of UFC pay per view events , including the next big pay per view of UFC 252 Miocic vs. Cormier 3 on August 15. The service also has more UFC Fight Night events like this one, including some that are exclusive to the service. ESPN+ has tons of great sports content, including the full "30 for 30" library, and the ESPN app is where you go to watch ESPN+ games and events.

How much will UFC Fight Night: Brunson vs. Shahbazyan cost?

UFC Fight Night: Brunson vs. Shahbazyan is on ESPN+, which costs $5 a month or $50 for a one year subscription. You are able to cancel at any time. ESPN+ used to offer a free trial , but they no longer do. The service gives users access to plenty of sports including tons of UFC fight cards. Sign up for ESPN+ today, and you can see this UFC Fight Night on July 18 with Brunson vs. Shahbazyan.