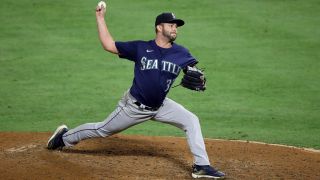 The Oakland Athletics will travel to the Pacific Northwest to battle their division rival Seattle Mariners Friday, July 31.

The game will be broadcast on ESPN+ and MLB.TV for out-of-market viewers starting at 9:40 p.m. Eastern time, or 6:40 p.m. local time in Seattle. The game will be played without a crowd at T-Mobile Park in downtown Seattle. Fans in the area can catch the game on their local broadcast, which may be found and watched with a free trial on streaming services like Hulu with Live TV or YouTube TV .

Preview of Athletics vs. Mariners

This matchup features two American League West teams, one trying to unseat the Houston Astros as division champs and the other attempting to escape the division's cellar.

The Athletics' 2019 season ended at the hands of the Tampa Bay Rays during the wild card round of the Major League Baseball playoffs last year after winning 97 regular season games. That matched their win total from the previous season, but they've had the misfortune of being in the same division of the Astros, who have gone to the World Series twice in the past three years.

But 2020 is a new year. The Astros have been dogged by a cheating scandal and the regular season has been reduced to just 60 games due to the coronavirus pandemic. The latter makes for a lot of uncertainty in how the season will ultimately play out, but it does mean there will be an expanded 16-team postseason.

Friday night's game will mark the 2020 home opener for the Mariners, albeit with no fans in the stands due to the pandemic. They finished at the bottom of the division last year with just 68 wins and aren't expected to make much of a splash this year.

The Mariners do feature outfielder Mallex Smith, who led the MLB with 46 stolen bases last year.

How to watch the Athletics vs. Mariners

Both ESPN+ and MLB.TV are scheduled to carry the game for fans who don't live in the immediate area. Local fans using those services will be out of luck due to blackout restrictions.

ESPN+ costs $5 a month, or $13 a month when bundled with Disney+ and Hulu. It doesn't require a cable subscription and offers some live sports and original programming, but it's only meant as a kind of an add-on for the worldwide leader in sports.

ESPN+ doesn't offer a free trial. Here's how you can sign up for the service and watch it on your TV.

MLB.TV offers three packages for this season, including $60 for streaming every team's out-of-market games for the year, live or on-demand. But like ESPN+, it doesn't show live games within the home territory of either team. MLB.TV offers free trials if you want to give it a spin.

Local viewers can catch the game on NBC Sports California or Root Sports Northwest. If you're opting against cable or satellite, those channels have some streaming options. For instance, Hulu with Live TV, YouTube TV, Sling TV and FuboTV carry NBCSN-CA, and AT&T Now offers Root Sports. Check your local listings at the links for other options that may be available.