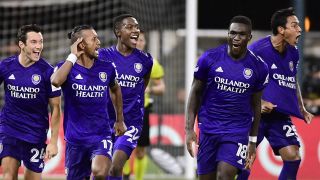 Orlando City in the MLS is Back Tournament after beating LAFC in the quarterfinals in a penalty shootout. (Image credit: Emilee Chinn/Getty Images)

The second semifinal of the MLS is Back Tournament — which is opening the truncated season in Orlando before teams finally make their way back to their home cities — features one team that nobody expected to make it this far, and other that's looked pretty darn solid to this point.

Both Orlando and Minnesota needed a shootout to reach the semis. Orlando's came in the quarterfinals as it knocked out defending MLS champ LAFC 5-4 on penalties. Before that, Orlando took out Montreal 1-0 in the opening game of the knockout round.

Minnesota beat Columbus 5-3 on penalties in their Round of 16 match, before handily dispatching San Jose 4-1 in the quarters. That game saw Robin Lod and Jacori Hayes score back to back in the 20th and 21st minutes. Luis Amarilla followed with a goal in the 56th minute, and Marlon Hairston added the finally tally in the 86th minute.

For those of you keeping score at home, that's five regular-time goals from Minnesota in just two games versus just one goal a match for Orlando. Joao Moutinho got his in the 90th minute to force extra time against LAFC, and Tesho Akindele netted the winner against Montreal.

Minnesota is the slight favorite for the game right now, but they've got to be worried about injuries. There aren't fans in the stands, but you have to believe that Orlando will be boosted by the potential of winning the season-opening tournament in their own backyard.

United have the edge in the series, with a pair of wins on four goals over Orlando. The teams also have one draw.

The winner of this semifinal plays either the Philadelphia Union or Portland Timbers, who face off the day before.

How to watch Orlando City SC vs. Minnesota United SC if you're in the United States

This semifinal is available on ESPN2 and ESPN Deportes in the United States.

ESPN Deportes is available on Hulu, and on the Optimo Mas plan with AT&T TV Now.

You also can catch the game in the ESPN app.

How to watch Orlando City SC vs. Minnesota United SC if you're in Canada

For our friends up north, the game is available on TSN and TVAS2, as well as in the TVAS app.