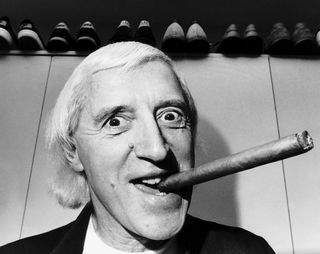 The Reckoning will trace Jimmy Savile’s life, from his working-class early years in the dance halls of northern England to his presenting career with the BBC where he became one of TV’s biggest stars, hosting hit shows in the 1970s such as Top Of The Pops and Jim’ll Fix It. It also will look at how his prolific sexual abuse of underage kids was kept under wraps until after his death in 2011.

"I think this is a story that has to be told," explains The Reckoning’s writer and executive producer Jeff Pope. "We must understand why a man like Jimmy Savile seemed to remain immune for so long to proper scrutiny and criminal investigation."

Who was Jimmy Savile?

Savile rose to fame in the 1960s and in the 1970s was a popular radio DJ and TV presenter, who regularly hosted Top of the Pops and had his own long-running children’s teatime show Jim’ll Fix It, where he arranged for children’s wishes to come true. He was also known for his fund-raising and support for  charities and hospitals.

Why is Jimmy Savile so reviled?

Savile is now considered to be one of Britain's most prolific sex offenders after hundreds of sexual abuse allegations were made against him after his death. It’s thought he used his fame and his involvement in the BBC, hospitals and charities to legitimise himself.

How is the BBC justifying telling Jimmy Savile's story in 'The Reckoning'?

The Reckoning team are working closely with many people whose lives were impacted by Savile and the drama series will also draw on extensive and wide-ranging research sources. "We don’t intend to sensationalize these crimes but to give voice to his victims," says controller of BBC drama Piers Wenger."We’ll work with survivors to ensure their stories are told with sensitivity and respect."

What other TV dramas is 'The Reckoning' writer Jeff Pope famous for?

Jeff produced the BAFTA-winning series Appropriate Adult, which starred Dominic West as Fred West, as well as The Moorside, the series that told the story of the community impacted by the disappearance of Shannon Matthews. He also wrote ITV dramas Cilla, Little Boy Blue and A Confession.

It hasn’t yet been confirmed who will portray Savile in The Reckoning. However, thanks to his roles in the The Lost Honour of Christopher Jefferies and in the recently critically acclaimed ITV and Sundance Now series Des, Jason Watkins (pictured above) could well be in the frame, as could Game of Thrones and Harry Potter star David Bradley. Hugh Grant too could be a contender, after all he's played another 1970s public figure caught up in a big sex scandal, namely British politician Jeremy Thorpe in BBC1 drama A Very English Scandal. As for the younger Savile, Freddie Fox recently impressed as chilling murderer Jeremy Bamber in ITV’s White House Farm, while Us star Tom Taylor could be another name to watch out for.

When will The Reckoning start filming?

Casting news and further details about when filming will begin on The Reckoning will be announced soon.