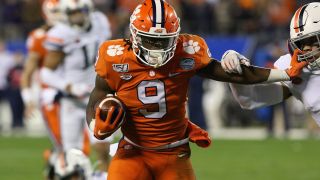 College football games are finally back, and fans are doing all they can to see every single game. While other sports may be the national pastime, college football is a truly American passion. (If only because we're the only country that plays American football. But I digress.) Millions of fans gather in campus stadiums on Saturdays each fall to root on their school and their team.

Even more fans tune in on TVs to watch the best teams in college football compete for glory and a shot at a national championship. You no longer need to pay sky high monthly bills just to be a part of the action. It's time for a deep dive into how to watch college football online.

This year the college football schedule is going to be smaller than usual, because COVID-19 has caused some conferences to postpone their schedules.

All times are Eastern.

College Football draws big crowds and big ratings, so FBS football games are in high demand by TV networks that air sports with over 20 networks involved. Most games are on Saturdays, but college football has expanded out to include more Thursday night games, and occasionally other special game days and times. With less games due to the effects of COVID-19, some networks may be left without games this fall season. Here is a list of the major networks that typically cover college football games in a normal season.

With so many different ways to watch college football, it can be hard to pick a way to watch without cable TV. Some services may be better based on the specific team or conference you root for, and we have suggestions and full breakdowns linked below. If you are a big fan of all things college football, there is one suggestion for the best overall way to stream the most games easily without cable or satellite.

College Football's best streaming option coast to coast is Hulu with Live TV. For $55 a month, after a one week free trial , fans get access to nearly every network with college football action this season. Hulu with Live TV also offers local feeds from all the major networks, but fans should be sure to check their zip code to find their local channels . The combination of a broad coverage of channels with college football, conference networks, and a reasonable price make Hulu with Live TV our pick for best overall live TV streaming service for College Football.

Best for everything not on TV: ESPN+

Even with a reduced college football schedule this fall, there are still some games that will be exclusively available streaming online. That's where ESPN+ comes in. It's the all-digital arm of the storied sports network, and it has college football games nearly every weekend that you just can't get anywhere else. It's easy to sign up for ESPN+, which is available on your phone, tablets, web browser — and, of course, on your TV.

Best for The Power Five Conferences: Hulu with Live TV

In late summer, both the Big Ten and the Pac-12 has postponed their football season, but now they are both returning later this season. The ACC, Big 12 and SEC are playing ball now ball, and the Big Ten is going to join them later in October.

College football is more than just the Power Five conferences. The Group of Five refers to the AAC, Conference USA, MAC, Mountain West and Sun Belt. While they may not be in the College Football Playoffs every year, teams in the Group of Five play with a high level of intensity, and the games can be thrilling.

Some conferences will play with modified schedules or start at later times, but it's looking more likely that they all will play some football.

The best way to watch the Group of Five conferences college football is YouTube TV.

Fans have more options than ever before to watch college football games streaming online. Fubo TV has long had a strong focus on sports, and the service recently added ESPN channels to an already strong lineup. If you live near an ACC or SEC school, you will even get those conference channels too. However Fubo lacks ESPNU.

AT&T TV Now includes many of the channels you would need for a full college football weekend, but most will require you to pick at least the $80 Max plan. Sling TV offers the lowest regular price among the live streaming services, but most college football fans will need to at least step up to the Orange+Blue plan for $45. If you want ACC Network, SEC Network and Longhorn Network with Sling TV (yeah, you do) that will require a $10 Sports Extra add-on.

Sirius XM has a dedicated channels for the major conferences, including all of the Power Five. These radio stations include coverage of games along with conference specific talk and analysis. It is available in your vehicle, or streaming to your mobile devices.