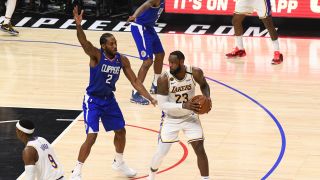 The NBA Playoffs have reached the Conference Finals, with Los Angeles Lakers vs. Denver Nuggets and Miami Heat vs. Boston Celtics representing the best in basketball this season.

The Playoffs have been rolling along for a while, and the NBA bubble rules have delivered lots of postseason basketball nearly every day for over a month. Now we get one premium game almost every night of the week.

You don’t need a long term cable contract either. Here's how to watch the NBA Playoffs live stream.

How to watch the 2020 NBA Playoffs live stream in the U.S.

NBA Playoffs games in 2020 are available on several broadcast and cable networks, including ABC, ESPN, TNT, and NBA TV. The different 2020 NBA Playoffs series will rotate between networks in the first rounds.

You can access these channels online on five of the largest live TV streaming services.

YouTube TV is the best recommended option for fans who want to see every game. The service includes ABC, ESPN, TNT and NBA TV for all the national NBA Playoffs games.

Hulu with Live TV and some of the other services offer a variety of free trials. It offers ABC, ESPN and TNT, but Hulu with Live TV doesn’t have NBA TV. Sling TV’s Orange Plan offers the lowest regular price among the live streaming services, and it will include ESPN and TNT. You can also get NBA TV for $10 more with the Sports Extra add-on, but you won’t get ABC streaming live with Sling.

Fubo TV recently added ESPN to their package that already has NBA TV. However Fubo TV no longer includes TNT. Meanwhile AT&T TV Now has a plan that can get all the channels, including ABC, ESPN, TNT and NBA TV but it will cost you $124 a month.

If you're in the United Kingdom, you can still see lots of postseason basketball action. The NBA Playoffs is broadcasting on Sky Sports channels.

Sky Sports Arena is available as part of the Sky Sports Pass, with no pay cable package required. You can choose between several different Sky Sports Passes, including a Day Pass for £9.99, a Week Pass for £14.99, or a Month Pass for £33.99 per month.

Travel has been locked down for so long that many people are itching to go somewhere new as soon as they can. If that means international travel, it could make it hard to keep up with the games you were watching at home. Geographic limitations don’t have to mean that your streaming subscriptions look like they’ve lost all their value.