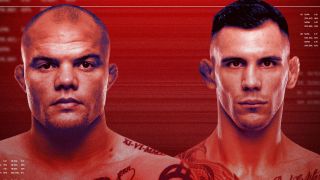 UFC Fight Night Vegas 8: Smith vs. Rakic will mark the start of a new era in the light heavyweight division. Longtime champion Jon Jones has vacated, and has his sights set on a new title.

Two top ten fighters are ready to go head to head, and try to bounce back from loses to get in position to fight for the vacant title. Your ticket to UFC APEX is online, because you can watch Anthony Smith vs. Aleksander Rakic in UFC Fight Night Vegas 8 on ESPN Plus (ESPN+) or ESPN.

When is UFC Fight Night: Smith vs. Rakic?

Where can I watch UFC Fight Night: Smith vs. Rakic in the U.S.?

You can watch the entire UFC Fight Night: Smith vs. Rakic as part of ESPN+. A subscription to the sports streaming service will get you the entire event, including the main event between Anthony Smith and Aleksander Rakic. ESPN+ includes lots of live sports, when live sports are in action of course, and a large collection of past UFC fights on ESPN+ too.

You can also see the Prelims from UFC Fight Night: Smith vs. Rakic from ESPN on five of the largest live TV streaming services. Each service will have what you need to start watching at 6 p.m., but you won’t be able to see the Main Card later Saturday night.

Hulu with Live TV and some of the other services offer a variety of free trials. Sling TV’s Orange Plan offers the lowest regular price among the live streaming services, and it includes ESPN. YouTube TV has ESPN and one of the deepest rosters of sports channels of any live TV streaming service.

Fubo TV recently added ESPN to their package, and this service has been sports focused from the start. Meanwhile AT&T TV Now has plans that include ESPN, but for big sports fans you can also step up to include tons of regional sports networks to watch your local teams play other sports too.

All times shown are Eastern time.

Anthony “Lionheart” Smith (33-15) is the fifth ranked Light Heavyweight fighter, and he’s ready to make a move in a suddenly wide open division. Jon “Bones” Jones has long dominated this division, but he recently vacated the title. Jones has even hinted that he may move up to challenge Stipe Miocic for the heavyweight belt.

Smith started on a great run at Light Heavyweight, but he was defeated by Jones by unanimous decision. Now, he hopes to get back on the winning track, and maybe work his way into a fight for the vacant title.

Aleksandar Rakic (12-2) is the eighth ranked UFC Men’s Light Heavyweight fighter, and he’s hoping to bounce back from his first loss in the UFC. After losing his professional debut in 2011, Rakic won 12 fights in a row, including his first four UFC bouts. But last December, Rakic lost a close split decision to Volkan Oezdemir, snapping his win streak. Now Rakic is ready to get back in the octagon, and start a new streak that could take him to the top.

I vacated the light heavyweight championship because I knew my heavyweight goals were going to take some time. I wasn’t going to play games with the contenders and make people fight interim championship belts. There’s little rest on the throneAugust 28, 2020

Where can I watch UFC Fight Night: Smith vs. Rakic in the U.K.?

UK fight fans can watch UFC Fight Night Smith vs. Rakic live stream on BT Sport1. You don't need a long term contract either with the BT Sport Pass. For just £25 a month, fans can see UFC Fight Night events along with Premier League football and tons of other sports.

You can watch the BT Sport Pass coverage live stream of Smith vs. Rakic begins at 11 p.m. BST. The main event takes over at 2 a.m. BST.

UFC Fight Night: Smith vs. Rakic will be available to stream in the U.S. via the ESPN app. You’ll use the same app for this event, whether you are watching using ESPN+ or a Live TV streaming login for the ESPN channel. ESPN+ is the exclusive U.S. home of UFC pay per view events , including the next big pay per view of UFC 253 Adesanya vs. Costa on Sept. 25.

In the U.K., UFC Fight Night: Smith vs. Rakic will stream in the BT Sport Box Office app, available for iOS and Android, or on the BT Sport website. The apps can also be used with Google Chromecast or Apple Airplay to watch on your big screen.

How much will UFC Fight Night: Smith vs. Rakic live stream cost?

UFC Fight Night: Smith vs. Rakic is on ESPN+, which costs $5 a month or $50 for a one year subscription. You are able to cancel at any time. ESPN+ used to offer a free trial , but they no longer do. The service gives users access to plenty of sports including tons of UFC fight cards. Sign up for ESPN+ today, and you can see this UFC Fight Night on Aug. 28 with Smith vs. Rakic.

If you choose to watch the Prelim fights on ESPN, you might be able to snag a free trial to one of the variety of Live TV streaming services that include ESPN. Hulu is one option with a one week free trial , and it includes a lot more to try during your free week.