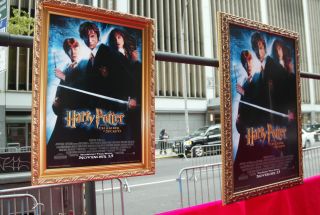 The Harry Potter movies will be leaving HBO Max in late August before reappearing on Peacock in October. (Image credit: Jim Spellman/Getty Images)

NBCUniversal today announced that its Peacock streaming service will soon be home to all eight Harry Potter movies the rest of the year and into 2021.

The Potter films, based on the J.K. Rolling books, were a surprise addition to HBO Max when it launched in late May. But HBO Max appears to only have had a 90-day exclusive period and will lose the Potter films on Aug. 25.

It looks like there will be a bit of a dark period before Peacock gets Potter in October.

For the uninitiated, the films include:

“The Harry Potter franchise is beloved by people of all ages and represents the caliber of quality entertainment customers can expect to find on Peacock,” Frances Manfredi, President, Content Acquisition and Strategy, Peacock, said in a press release. “We’ve built a world-class collection of iconic movies and shows, and we will continue to expand the film library with treasured titles from NBCUniversal and beyond that will surprise and delight Peacock customers time and time again.”

What wasn't mentioned was whether the Harry Potter films will be part of the free tier on Peacock, or whether you'll need the $4.99-a-month Peacock Premium. Both of those tiers include advertising, which you can remove for another $5 a month.

In addition to all eight Harry Potter films, popular titles coming to Peacock over the next six months include “Alex Cross;” “The Big Lebowski;” “Brokeback Mountain;” “The Conjuring;” “Dolphin Tale;” “E.T.;” “Moonrise Kingdom;” “Snakes on a Plane;” “Something New;” “Welcome Home, Roscoe Jenkins;” “Won’t You Be My Neighbor;” “Evan Almighty;” “Little Fockers;” “Big Fat Liar;” “3:10 To Yuma;” “The Break-Up;” “Catwoman;” “Dawn of the Dead;” “Love Happens;” “National Lampoon’s Vacation;” “Trolls World Tour;” “Wanted;” “You Should Have Left;” “Spirit;” “Apocalypto;” “A Beautiful Mind;” “The Blues Brothers;” “The Express;” “Fast & Furious; The Fast and the Furious: Tokyo Drift;” “Get Him To The Greek;” “The Great Outdoors;” “Hellboy II: The Golden Army;” “Kicking & Screaming;” “King Kong;” “Mama;” “Shrek;” “Terminator Salvation;” “The Wedding Date;” “You, Me and Dupree;” “The Tale of Despereaux;” “Any Given Sunday;” “The Bourne Identity;” “The Bourne Supremacy;” “The Bourne Ultimatum;” “Children of Men;” “Field of Dreams;” “Knocked Up;” “Last Holiday;” “The Last Witch Hunter;” “Parenthood;” “Police Academy;” “Scent of a Woman;” “Scorpion King;” “Wanted;” “What Women Want;” “The Kids Are All Right;” “Batman Begins;” “Beetlejuice;” “Changeling;” “The Dark Knight;” “Hulk;” “Jet Li’s Fearless;” “The Mummy;” and “Sleepy Hollow.”

The Peacock streaming service is available on most major streaming platforms, with the notable exception of Roku and Amazon Fire TV.