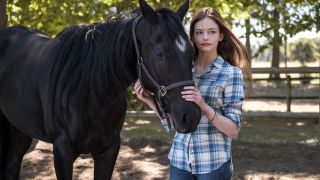 Disney+ has announced that a new movie adaptation of the classic Black Beauty will come to the streaming service in the back half of 2020.

The film, taken from the classic 19th century Anna Sewell novel, will star Mackenzie Foy (Interstellar, The Nutcracker and the Four Realms) as Jo Green, and Oscar winner Kate Winslet will voice "Black Beauty" herself.

The gist of the story, for those whose grade-school English careers never included the novel:

Black Beauty is a wild mustang born free in the American west. When she is captured and taken away from family, her story intertwines with that of 17-year old Jo Green, similarly grieving over the loss of her parents. The two slowly develop a bond that is built on love, respect and mutual healing.

No word on exactly when the film drops, other than later in 2020. (It's not listed on Disney's schedule for August 2020, anyway.)