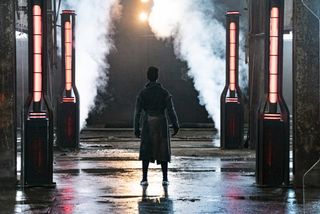 Star Trek has existed in our universe (and presumably everywhere else in the multiverse) for more than 50 years. In that that time we've grown from the early days of Capt. Kirk, Spock and Bones, to Picard and Riker and Data. The legacy has lived on beyond The Next Generation, with spinoffs Deep Space Nine, Voyager, and Enterprise on TV, and a parallel series of films with an all-new cast.

And with Star Trek: Discovery — the first to live exclusively (more or less) on a dedicated streaming service and not on traditional terrestrial television — we've got a next, next, next generation of Trek. And it may well be the best yet.

Discovery pushed back from the proverbial space dock in September 2017. And with it, CBS All Access — which has become the exclusive streaming home for all things Trek — firmly planted its flag in the universe not just of science-fiction, but in dramatic television as a whole.

Season 3 of Discovery premiers in October 2020. Let's catch up on what you might have missed. There will be a few necessary spoilers below in the Season 1 and 2 sections. But for right now, you're safe.

How to watch Star Trek Discovery in the United States

CBS All Access is the standalone streaming service for ViacomCBS, which is a huge media company that's home to all kinds of content. That includes Paramount, and that means the larger Star Trek universe. It's also home to other exclusives like The Good Fight, and the Jordan Peele reboot of The Twilight Zone.

CBS All Access will be rebranded to Paramount+ sometime in 2021.

For now, however, it's still CBS All Access. And it costs $5.99 a month for the standard service. That gets you the bulk of the ViacomCBS catalog, as well as all the new exclusives. You'll still be subjected to advertising, however, but for an extra $4 a month you can get rid of most of that.

(You also can purchase full seasons of Discovery on iTunes and Google Play.)

How to watch Star Trek: Discovery everywhere else

Outside the United States, Star Trek: Discovery is available on Netflix in 188 countries. In Canada, it's available on Bell Media's CTV Sci-Fi Channel, and the streaming service Crave.

Or, if you prefer, you can use a VPN to get to your country of choice to watch Star Trek: Discovery from anywhere. A virtual private network allows you to route all of your internet traffic through a specific set of servers through a specific country, so it's as if you never left.

The only trick with this is that you need to be able to trust your VPN company, because all of your internet traffic is going to be going through it. For that, we recommend ExpressVPN.

And it's a great way to watch Star Trek: Discovery from anywhere in the world.View Deal

Star Trek: Discovery: The cast, the premise, and why it's a big deal

Let's just cut to the chase. This is a good show. Yes, you'll probably want to have at least a minimum context of the Trek universe, but it's not absolutely necessary. Discovery has a few characters you'll know from the other series, but it's mostly about new ones.

Unlike virtually every other Trek series, Discovery doesn't focus on the commanding officer. That gives a new perspective from which to tell the story. And that's not to say that the captain isn't very much involved, or that the stories told are ancillary and not as exciting. Quite the opposite, in fact. It's just a great, intriguing new way to tell the tale.

Discovery takes place a decade or so before The Original Series, with Captain Kirk and the gang.

We're following Commander Michael Burnham (Sonequa Martin-Green, who you may remember as Sasha from The Walking Dead). She's obviously not Vulcan but was raised as one by Sarek (James Frain) — yes, Spock's father — and his wife (and Spock's mom) Amanda Grayson (Mia Kirshner). So already you know this is going to be complicated — a human raised as a Vulcan, and foster sister to a half-human/half-Vulcan Spock.

There's also Capt. Philippa Georgiou (Michelle Yeoh), an interesting name for a very Chinese captain on board the USS Shenzou. Her first officer is Saru (Doug Jones, who you'll know as the amphibian man in The Shape of Water), a Kelpian and the only one of his kind in Starfleet.

The cast expands a good bit from there, but we'll break that down just a tad more in the Season 1 and 2 sections.

The basic premise laid out is this: the USS Shenzou, with Burnham, Georgiou and Saru on board, stumbles across an anomaly that turns out to be an ancient Klingon ship that's doing its best to hide, but also has become a beacon meant to unite the Klingon houses. Burnham kills someone and accidentally starts a war, a lot of people die, and she ends up committing an act of mutiny on the Shenzou before ending up on Discovery.

If there's one major criticism of Discovery as a series, it's this: There is a LOT going on. A lot of characters, a lot of species, and a lot of moving parts. These parts are going to come and go. They're going to twist and turn on on top of each other

That's the end of the non-spoiler parts. We'll dive in a little deeper from here — and ruin things along the way. So if you're not up for that, just go ahead and get your CBS All Access subscription now and get to watching. If you want more in written form, however, read on.

That little act of mutiny Burnham committed on board the Shenzou? It might well have saved the ship and prevented all-out war — and saved the life of Captain Georgiou. Instead, it made Burnham the most hated person in all of Starfleet

Which is why it's interesting that as she's in the middle of a not-so-routine prison transfer (mutiny is still bad, of course), she ends up on board the USS Discovery, thanks to Captain Gabriel Lorca (Jason Isaacs, with an awful accent). He's a brilliant tactician and leader, but butts heads with the scientific staff on board his ship. He wants to win the war, and the scientists want to science the shit out of whatever secretive thing it is they're doing. They need Burnham's help, though they won't tell her (at first) what they're up to.

It turns out that the big secret is a new kind of propulsion system that doesn't so much make a ship go faster as it does make it instantaneously appear somewhere. That is, so long as it doesn't accidentally turn everyone's bodies inside out first. It happens. How does this "Spore Drive" work? With mushrooms. Yes, really. The ability to leap across a galaxy is a convenient plot point, and also a great way to win a war

Meanwhile, the sort-of united Klingons are kicking Starfleet's ass thanks to its cloaking devices. The leader, Voq (Kenneth Mitchell) will do anything to win this war and reunite the Houses in the old ways. It turns out he'll do everything, in fact — including taking over the body of Starfleet officer Ash Tyler (Shazad Latif), who had been held on a Klingon prison ship with scoundrel Harry Judd (Rainn Wilson).

Wait — it's not even complicated yet.

Discovery ends up accidentally jumping (via its Spore Drive) into an alternate universe — one in which Starfleet isn't good, Georgiou isn't dead — and in which Captain Lorca's evil twin originated before ending up on Discovery. Turns out this whole thing was a ruse to get him home.

Meanwhile, Ash Tyler (who has one of those names that has to be said in its entirety) realizes he's actually a weird sort of Klingon agent — which puts a damper on his burgeoning romance with Burnham. There's a new plan to blow up the Klingon home world, and Burnham hands the trigger to ... the female Klingon strategist who was in love with Voq, and turned him into Ash Tyler. (Or Ash Tyler into Voq.)

Plus, bad Georgiou from the alternative is now mostly good Georgiou.

The war with the Klingons is over, but now there are some mysterious signals coming from across the galaxy. Discovery — with Captain Christopher Pike (Anson Mount) in the chair while the USS Enterprise undergoes some conveniently weird maintenance — heads off to investigate one of them, where Burnham and Pike discover ... comedian-turned-Starfleet engineer Tig Nortaro (Jett Reno, in the series).

Burnham almost dies during the rescue of Reno — until a mysterious Red Angel-looking figure shows up just in the nick of time and saves her. Where there's a signal, there's a Red Angel, apparently.

Meanwhile, Spock took leave from the Enterprise but also apparently went quite mad and might have killed a couple people. So Burnham wants to to find her foster brother. Also hot on his trail is Section 31, which is a shadowy Starfleet-sanctioned group that does what needs to be done, even if it plays in the gray areas more than you're used to in a Star Trek series.

There's a lot of intra-Starfleet politics going on in this one. Georgiou and Ash Tyler have ended up with Section 31. And both probably can be trusted to do what's right even if it means doing what's wrong. Probably.

Eventually everyone figures out that where there's a signal, there's the Red Angel. So they devise a plan to capture the Red Angel to figure out what the hell is going on, why Burnham and Spock and others have had visions of the Red Angel — and, oh, why the fate of all sentient life in the universe is at stake.

It turns out the Red Angel is ... [Sure you want this spoiler? OK.]

It turns out the Red Angel is Burnham's mother, Gabrielle (Sonja Sohn) believed to have been killed in a Klingon attack when Burnham some 20 years earlier. (This added another layer in Season 1.) It turns out she's been trapped in time 950 years into the future and has been coming back to present day to do ... Something.

And it turns out that that something is to stop Section 31's artificial intelligence called Control from getting some AI data from a 200-thousand-year-old sphere and deciding that every living thing must die. Now it's Control and Section 31 and their superior tech against Discovery, the Kelpians, the Klingons and anyone else they could scrounge up, trying to help Burnham lead Discovery 950 years into the future, where Control won't be able to get to the AI data.

It's one hell of a battle.

Star Trek: Discovery Season 3 — Back to the Future

And that brings us to Season 3 of Star Trek Discovery. There's a good bit we know, and a good bit we don't. Let's break it down in handy bullet point form:

After following Commander Burnham into the wormhole in the second season finale, season three of STAR TREK: DISCOVERY finds the crew of the U.S.S. Discovery landing in an unknown future far from the home they once knew. Now living in a time filled with uncertainty, the U.S.S. Discovery crew, along with the help of some new friends, must work together to restore hope to the Federation.