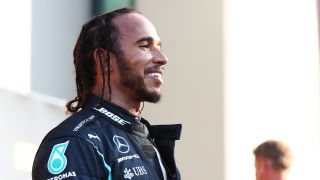 Lewis Hamilton has one two-thirds of the races in the truncated 2020 F1 season. (Image credit: Bryn Lennon/Getty Images)

That is, unsurprisingly at this point, where things stand as the series takes another week off before the Russian Grand Prix on Sept. 27 in Sochi. Perhaps that breather will give everyone else a chance to figure out how to do something about the dominance of Hamilton and Mercedes. Or, it will just give Hamilton more time to figure out how to continue his lead.

Mercedes still holes the top two spots in the drivers' points, with Hamilton in the lead at 190, followed by teammate Valtteri Bottas at 135. Red Bull Racing's Max Verstappen is in third at 110 points. It drops off precipitously from there, with Lando Norris fourth at 65 points, and Alexander Albon fifth at 63 points.

The gulf is even greater when it comes to the team standings. Mercedes is out in front with 325 points. Red Bull Racing is the next closest, with 173, followed by McLaren Renault at 106.

Hamilton is still on the hunt for Michael Schumacher's record for total wins. He's drawn within one victory after taking the Tuscan Grand Prix, and he could tie the record on Sept. 27 in Russia, then take sole possession of the title of the winningest driver in F1 history on Oct. 11 at the German Grand Prix.

F1 Past and Future

THE LAST RACE: Lewis Hamilton (who else, right?) won the Tuscan Grand Prix — his six victory in this season's nine races. He's one win away from tying Michael Schumacher's overall total of 91.

UP NEXT: The series has this week off before the Russian Grand Prix on Sept. 27 in Sochi.

Formula 1 racing, or F1 as the cool kids call it, is one of the oldest and most prestigious forms of auto racing. These open-wheel, single-seat race cars also pack the highest speed capabilities of the major professional racing leagues. It's no wonder why fans love watching these slick and tense races. For F1 fans, we have the full remaining 2020 schedule of Formula 1 races below to help you know when you can see the races, and from where they are broadcasting.

If you want to watch F1 racing, but have already said "goodbye" to the hassle and high prices of cable, you still have several good options. Here is how to stream Formula 1 races if you've cut the cord.

Watch while you're away from home with a VPN

Now that folks are slowly starting to travel again, it's entirely possible that you'll find yourself out of your home region and unable to watch the F1 race due to geographical limitations.

One way to fix that is to use a VPN so that your network traffic is coming from your home country. (After all, a Brit in, say, France, is still very much a Brit, right?) VPNs are easier to use than ever, and they're also less expensive than ever.

You may already be a subscriber of a streaming service, which will make it even easier to watch the Formula 1 races on ABC, ESPN and ESPN2. If you have never used a live streaming service, you could consider starting a free trial to see if they might be a good addition to your cable-free life. You will need to check with your streaming service of choice to make sure your local ABC station is included.

The cost: $55 a month after a one week free trial

The cost: $65 a month after a free trial

Formula 1 races on Sling TV: Some with ESPN and ESPN2 on Sling Orange. You’ll need another option for the race coverage airing on your local ABC.

The cost: $55 a month after a one week trial

Formula 1 races on Fubo TV: None right now, but ESPN and ESPN2 are set to arrive on Fubo in August. You’ll still need another option for the race coverage airing on your local ABC.

The cost: $55 a month after a free trial

In the U.S., the easiest way to get most of the Formula 1 races on the schedule this year is on ESPN and ESPN2. The two networks will be broadcasting 18 of the 21 total races, with two races on ESPN and sixteen on ESPN2.

Fubo will soon become an option for Formula 1 as well, as they recently announced that Fubo will add ESPN and other Disney networks soon. When the ESPN channels are live on Fubo, we will update to let you know.

Formula 1 races from ESPN and ESPN2 are available to you in the ESPN app. You can watch on any device that runs the app. You will need a login to activate the app. The ESPN app is available on Android phones and tablets, iPhones, iPads, Fire Tablets, Apple TV, Android TV, Chromecast, Fire TV, and Roku.

This year, Formula 1 on ESPN networks means more than just live races. Two F1 studio shows called Welcome to the Weekend and Pit Lane Live , which are produced by Sky Sports, will be available on ESPN3. ESPN3 is a streaming-only platform available through live streaming services and cable bundles alongside the regular ESPN networks.

ESPN3 is also available through some internet providers, like Comcast Xfinity or Verizon FIOS Internet plans. However, ESPN3 access through your internet provider only works on computers in a browser, not on streaming devices like Roku.

Check out the ESPN3 Schedule

If you are looking for a small taste of this racing action, it can be so easy to watch Formula 1 through your local ABC affiliate. ABC will broadcast three racing events this year, with one in June, October, and November. Simply connect a quality over-the-air antenna to your TV or tuner, and turn the channel to your local ABC station at the date & time on the schedule at the end of this article.

You don't have to be limited to just your television when you use an antenna. If you want to use your over-the-air antenna with a smartphone, tablet, or streaming device, you could consider buying an over-the-air streaming box. It will take whatever the antenna can pick up, and convert it to stream on your local network.

The official Formula One Federation, FIA, has their own paid streaming service available if you want the ultimate in F1 access. The plan includes access to content from F1, F2, F3 and Porsche Supercup levels, along with an catalog of past races.

F1TV offers two different subscription plans. F1TV Access costs $27 per year, and offers F1 race on demand replays and highlights, including angles from all onboard cameras from the cars. F1TV Pro is $80 per year, and it adds live streaming of every track session for every race. Live streams include the broadcast along with onboard cameras and team radios. If you choose F1TV Pro, you can get a 7 day free trial.