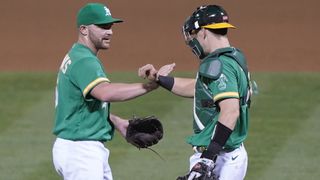 The A's and Liam Hendriks are hoping to close out the White Sox season. (Image credit: Photo by Thearon W. Henderson/Getty Images)

From Oaktown to the Chi and everywhere in between, fans want to know how to watch Oakland Athletics vs. Chicago White Sox live stream in the Wild Card series this week. This three game series pits the AL Central against AL West, with two teams that struggled down the stretch.

Here is how you can watch this Wild Card Series online featuring the Oakland Athletics vs. Chicago White Sox.

How to watch Oakland Athletics vs. Chicago White Sox  live stream in the U.S.

The Oakland Athletics vs. Chicago White Sox Wild Card series starts on Tuesday, September 29 at 3 p.m. from RingCentral Coliseum in Oakland, Calif. Games 1, 2 and 3 of this series will air on ESPN.

Sling TV ’s Orange Plan has ESPN streaming online for only $20 for your first month. You can upgrade to the combined Orange + Blue Plan to get most MLB Playoffs games among the live streaming services. (See all Sling TV channels.)

YouTube TV  is a highly recommended option for fans who want to see every game, and it includes ESPN for Oakland Athletics vs. Chicago White Sox. For $65, the service also has ESPN, Fox, FS1, TBS and MLB Network for all the other national MLB Playoffs games. (See all YouTube TV channels.)

Fubo TV recently added ESPN and ESPN2 to their package that already has Fox, FS1, ABC and MLB Network. Just be aware that Fubo no longer includes TBS, Athletics and White Sox fans might be disappointed once their team gets to the next round. (See all Fubo TV channels.)

The Oakland Athletics (36-24) won the 2020 AL West pennant by wide seven game margin. Unfortunately for the A's, they enter the playoffs limping after losing give of their last eight games. This Athletics team hasn't been strong at the plate, with only second baseman Tommy La Stella hitting above a .270 batting average. The team batting average is only .225, but the team ERA is 5th best in the league at 3.77. They look for starter Chris Bassitt to close the door on the White Sox in game two if they can win game one.

The Chicago White Sox (35-25) had a strong season that got undercut by a weak finish that cost them a division title. They closed out the regular season by losing seven of their last eight games. This club was a monster at the plate, finishing top 6 in batting average, runs and home runs. A big part of their power came from MVP candidate first baseman José Abreu, who leads the team and the league in many batting stats.

How to watch Oakland Athletics vs. Chicago White Sox live stream in the United Kingdom

If you're in the United Kingdom, you can still see lots of postseason baseball action. The Oakland Athletics vs. Chicago White Sox live Wild Card series will be on BT Sport ESPN channel. Heads up to U.K. fans that it looks like this game will be airing time delayed the next morning.

The Oakland Athletics vs. Chicago White Sox on BT Sport Pass will stream in the BT Sport Box Office app, available for iOS and Android, or on the BT Sport website. The apps can also be used with Google Chromecast or Apple Airplay to watch on your big screen. Check the BT Sport schedule each day, as games will be on BT Sport 1, BT Sport 2, BT Sport 3 and BT Sport ESPN.

How to watch Oakland Athletics vs. Chicago White Sox live stream in Canada