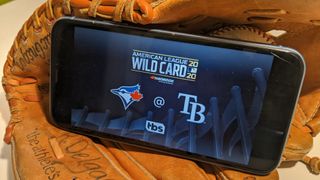 Fans of great baseball from Florida to Canada are itching to find out how to watch Tampa Bay Rays vs. Toronto Blue Jays live stream in the Wild Card series this week. The best team in the American League is set to play a three game series against a familiar foe who only made the playoffs because it expanded to sixteen teams. Smart baseball fans remember that last year, a Wild Card team won the World Series so every game matters.

Here is how you can watch this Wild Card Series online featuring the Tampa Bay Rays vs. Toronto Blue Jays.

How to watch the 2020 MLB Playoffs live stream in the U.S.

The Tampa Bay Rays vs. Toronto Blue Jays Wild Card series starts on Tuesday, September 29 at 5 p.m. from Tropicana Field in St. Petersburg, Fla. Games 1 and 2 of the series will air on TBS.

If a game three is necessary, it is likely to also air on TBS, but it is possible it could land on another MLB Playoff network.

You can access TBS online on five of the largest live TV streaming services.

Sling TV has TBS streaming online as part of either the Orange Plan or Blue Plan for only $20 for your first month. You can upgrade to the combined Orange + Blue Plan to get most MLB Playoffs games among the live streaming services. (See all Sling TV channels.)

YouTube TV is a highly recommended option for fans who want to see every game, and it includes TBS for Tampa Bay Rays vs. Toronto Blue Jays. For $65, the service includes the channels you need for all the national MLB Playoffs games. (See all YouTube TV channels.)

Fubo TV no longer includes TBS, so fans looking for the Tampa Bay Rays vs. Toronto Blue Jays series should look at other options. (See all Fubo TV channels.)

The Tampa Bay Rays (40-20) finished up the shortened 2020 MLB season with the best record in MLB, winning fully two out of every three games they played. The team pulled this off with excellent pitching, including the third best Earned Run Average in the league (3.56). Expect starting pitchers Blake Snell (4-2) and Tyler Glasnow (5-1) to play a heavy role in this series, and the Rays’ hope to close this out quickly to prepare for a divisional series.

The Toronto Blue Jays (32-28) are one of the teams that wouldn’t have made the Playoffs under the old system, but they’ve got a chance at glory in 2020. The Blue Jays finished third in their division, and just two games over .500. However, as the sayings go they reset the records in the playoffs. The Blue Jays have been powered by hitting, and they were a top ten team in runs scored. Outfielders Randal Grichuk and Teoscar Hernández along with third baseman Vladimir Guerrero Jr. combined for 102 RBI in just sixty games. If they get hot, this will be a series to watch.

How to watch Tampa Bay Rays vs. Toronto Blue Jays live stream in the United Kingdom

If you're in the United Kingdom, you can still see lots of postseason baseball action. The Tampa Bay Rays vs. Toronto Blue Jays live stream Wild Card series will be on BT Sport ESPN channel Tuesday, and BT Sport 3 on Wednesday.

The Tampa Bay Rays vs. Toronto Blue Jays on BT Sport Pass will stream in the BT Sport Box Office app, available for iOS and Android, or on the BT Sport website. The apps can also be used with Google Chromecast or Apple Airplay to watch on your big screen. Check the BT Sport schedule each day, as games will be on BT Sport 1, BT Sport 2, BT Sport 3 and BT Sport ESPN.