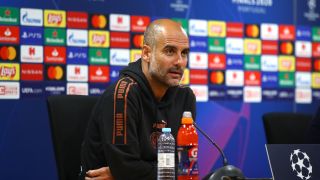 Pep Guardiola, manager of Manchester City speaks to the media on Friday ahead of Saturday's game against Lyon in the last Champions League quarterfinal. (Image credit: UEFA/Getty Images)

Manchester City are heavy favourites to progress to the final four. Bookies are offering odds of 12/1 on Lyon winning, which in a one-off tie seems very high. Can Rudi Garcia's side overcome Pep Guardiola's team?

Today sets the final spot in the Champions League semifinals. Leipzig and Paris Saint-Germain play on Aug. 18. And the winner of today's game will face Bayern — which absolutely destroyed Barcelona 8-2 in the quarterfinals.

If you are interested in watching the game and want to know more — this article is for you.

How to watch Man U vs. Lyon from anywhere

Saturday's game is available on CBS All Access in the United States, which is easy enough to come by. It runs $5.99 a month and has a free trial, so you effectively can catch this game for free, if you want.

The knockout stages so far

Manchester City put paid to Real Madrid’s hopes of progression in the Champions League with a 4-2 aggregate win. Pep Guardiola and his players looked very assured in the win over the two legs and now will be confident of getting into the last four with a win over Lyon. But the French side is not an outfit that Manchester City should take too lightly.

Lyon surprised many in the last round beating Italian Champions Juventus. The game ended on aggregate 2-2 but Lyon went through due to the away goals rule. Memphis Depay scoring the crucial goal in a 2-1 loss in Turin after the first leg which ended Lyon won 1-0.

Some background on the teams

Both sides will be disappointed with how their domestic seasons went. Manchester City relinquished the Premier League title to Liverpool.  They ended a massive 18 points behind Liverpool and lost nine times in the League which even though they finished in second place is an unacceptable points difference behind the winners and too many games lost.

Lyon ended their French League season in seventh place. A massive disappointment. They were 28 points behind Paris Saint-Germain who have already earned a semi-final spot after a dramatic last-gasp victory over Atalanta. Lyon, due to finishing outside the top six, will not be playing European club football next season unless they win the Champions League. Unlikely but not impossible.

Undoubtedly, Manchester City starts as favourites. The side from midfield onwards are strong with players of the quality of Kevin De Bruyne, Ilkay Gundogan, Raheem Sterling and back in his native country for this game, Bernard Silva. Striker, Sergio Aguero is unlikely to play any part in this tie as he is still recovering from his recent knee operation. His replacement, Brazilian, Gabriel Jesus is a competent deputy and scored twice over the two legs against recently crowned Spanish Champions, Real Madrid.

Lyon will be buoyed in confidence after their excellent win over Juventus. The midfielder, Houssem Aouar, is an outstanding player and is being eyed by several big-spending European clubs. Striker, Memphis Depay looks nothing like the player who played for Manchester United and is now showing the ability regularly that many thought he would when he was a young player with bags of potential for PSV Eindhoven.

Lyon has never lost against Manchester City in the Champions League. Granted, it is only two games they have faced each other, but it is still a fact. However, I do not see that unbeaten record continuing. Manchester City have too many good players and will be desperate to get into the semi-finals, and I don’t see Lyon having enough to stop them.

Where can you watch the games in the United States?