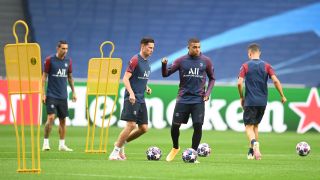 Italian Serie A club Atalanta will play France's Paris Saint-Germain on Wednesday, Aug. 3, in the first of the quarterfinals of this year’s unique Champions League competition.

The game is being played in Portugal at the Estadio da Luiz in Lisbon, home of Benfica. All the games from this round onwards will be played in Lisbon for safety due to the ongoing pandemic which has impacted us all.

So where can you watch Atalanta vs PSG, what can you expect from the two teams and who to watch out for? If any of those areas interest you, then please read on.

How to watch Atalanta vs Paris Saint-Germain from anywhere

Wednesday's game is available on CBS All Access in the United States, which is easy enough to come by. It runs $5.99 a month and has a free trial, so you effectively can catch this game for free, if you want.

A VPN can route all your network traffic through home country. So if you'd normally be watching from France but aren't actually in France, you can make it look like you're in France with a VPN. (And for all intents and purposes, it's like your computer is in Germany.) Or Italy, or Germany, or wherever. A VPN basically levels the playing field in that way.

The journey so far

Atalanta qualified for this year’s Champions League tournament by finishing third in Serie A last season, the highest position they have achieved in their history. This season, they finished third yet again, only five points behind the Champions, Juventus, in another fantastic campaign for the Bergamo based club, and their football campaign for this season is not over, however.

They finished comfortably in second place in their group behind Manchester City. Then after getting to the knockout stages, they beat Spanish side Valencia 8-4 on aggregate over two thrilling games played. Atalanta won 4-1 at home with two goals from Hans Hateboer and one apiece from Josep Ilicic and Remo Freuler. In the second leg, they travelled to Valencia and again scored four, in a goal-fest at the Estadio de Mestalla. The Italian side won 4-3 on the night with all the goals for Atalanta being scored by Ilicic.

Paris Saint-Germain is a club owned by Qatar Sports Investments, which have colossal wealth led by Tamim bin Hamad Al Thani, ruler of Qatar. PSG for several years have earned for success in this competition, have spent millions in recruitment, but have fallen short. Could this year be their year?

The French side was excellent in the group stages, topping their group, comfortably leaving real Madrid trailing in their wake in second place. PSG in the last round beat a good German side, Borussia Dortmund side over two legs by an aggregate score of 3-2. The Parisienne based side has star names such as Neymar, Kylian Mbappe and Mauro Icardi so have a potent strike force but can be inconsistent and when put under pressure can be brittle. Could they finally progress into the last four by beating Atalanta?

Atalanta is a great side to watch. There is a freedom in their play and some of their players not as known as other world stars, sometimes do not get recognised for how good they are. But, believe me when I say they have some fantastic players. Josep Ilicic and Duvan Zapata are an excellent strike partnership, and their midfield as a unit is a match for many. Timothy Castagne, Remo Freuler, Marten de Roon and Hans Hateboer complement each other so well and are the driving force of the side. Ilicic has been sidelined recently but it is hoped he will be fit for this encounter. If he is not fit then expect manager, Stefano Piolo to go with either Ruslan Malinovsky or Alejandro and change the formation slightly to a central striker, Zapata and either Malinovsky or Alejandro playing a withdrawn role behind Zapata.

PSG are sweating on the fitness of Marco Verrati and Kylian Mbappe both critical players for the French side and if they do miss out that is a significant loss for Thomas Tuchel’s side. Currently, it seems more likely Veratti will start than Mbappe due to their respective injuries, but over time that could change. Tuchel will hope both players make it for Wednesday.

This is a tough one to predict. With the unknown starting line ups with the fitness doubts with Ilicic for Atalanta and Veratti and Mbappe, it makes it even more of a challenge.

However, I feel that even though PSG have more prominent names in the footballing world, I feel that Atalanta has the better team. So I am going for a 2-1 win to Atalanta and their Champions League trek continues into the semi-finals.

How to watch the game in the United States