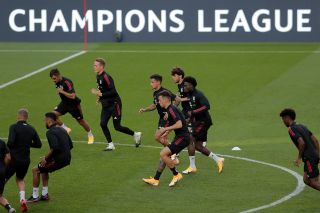 Barcelona and Bayern Munich have been involved in some great games over recent years in this competition and let’s hope this match is no different.

If you want to watch the game and not sure where it is on, then please read on.

CBS All Access is home to the UEFA Champions League quarterfinals — including today's game between Barcelona and Bayern. It's also home to the majority of the ViacomCBS catalog, as well as new exclusives like The Twilight Zone, Star Trek: Lower Decks and Star Trek: Picard.View Deal

How to watch Barcelona vs Bayern from anywhere

Today's game is available on CBS All Access in the United States, which is easy enough to come by. It runs $5.99 a month and has a free trial, so you effectively can catch this game for free, if you want.

A VPN can route all your network traffic through home country. So if you'd normally be watching from France but aren't actually in France, you can make it look like you're in France with a VPN. (And for all intents and purposes, it's like your computer is in Germany.) Or Italy, or Germany, or wherever. A VPN basically levels the playing field in that way.

The knockout stages so far

Barcelona defeated Napoli 4-2 on aggregate over two legs which for me was a bit of a surprise. There is no doubting the ability of some of the stars within the Barcelona side. Still, after speculation of a great deal of unrest behind the scenes and losing out to Real Madrid in the Spanish League I was unsure how the players would react. Now we know, they outplayed the Italian side and now will look forward to facing Bayern Munich in the Champions League yet again.

Bayern Munich comprehensively beat Chelsea over two legs by a scoreline on aggregate of 7-1. Robert Lewandowski, the outstanding Polish striker, scored three goals over the two games, and now has scored to date in this seasons tournament, a remarkable 13 goals. The German Champions had way too much for Chelsea, will Barcelona be a different story?

Some of the games between these two sides have been full of highlights. In 2013, Bayern destroyed Barcelona over two legs. 4-0 in Munich and then going to Barcelona and winning 3-0 before going onto becoming Champions of Europe that year. In 2015, Barcelona gained some revenge, Lionel Messi scoring two at the Nou Camp, including his glorious second when he dribbled past Jerome Boateng leaving him looking a complete novice, sprawled out on the grass face down, before going onto score. Barcelona went onto knock Bayern out of the competition in the second leg. In the Champions League, the two sides have played each other six times, with Barcelona winning twice and Bayern Munich winning four times.

Barcelona has striker, Ousame Dembele and defender, Samuel Umtiti doubtful for this game; neither was likely to start anyway so not a considerable loss if both are not fit. The front three of Messi, Luis Suarez and Antoine Griezmann looked very sharp against Napoli, so can they perform as well again this Thursday?

Bayern Munich has injury doubts over defenders Benjamin Pavard and Jerome Boateng as well as midfielder, Kingsley Coman. If the two defenders miss out, then this will give a selectional decision for Bayern to make. David Alaba is a class footballer, but does not strike me as a natural central defender but with Boateng/Pavard out who would play alongside him? It could be Javi Martinez or Niklas Sule which when you are facing a strike force such as Messi, Suarez and Griezmann you don’t want to fall back onto not having your first-choices available.

What a game to relish. So many stars on show whichever position you look. I went against Barcelona in the last round and was wrong, but I have not learnt my lesson. Bayern Munich is on a great run, and I just feel that they will overcome Barcelona and progress to the semi-finals. The scoreline I am going for is Barcelona 1 Bayern Munich 2.

Where can you watch the game in the United States?