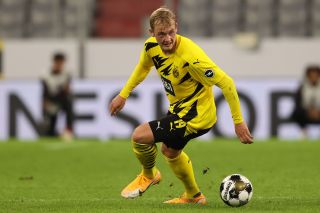 Borussia Dortmund meet Spoort-Club Freiburg on Matchday 3 of the German Bundesliga (that's the top-level football league) — and you can catch every minute of the match if you're in the United States.

But how to watch Dortmund play Freiburg?

It's easy: Any way you want.

How to watch Dortmund vs. Freiburg in the United States

The German Bundesliga is available in its entirety — that is, you can watch every single game — in the United States on ESPN+. You generally have two opportunities, with games starting at 9:30 a.m. Eastern time, followed by another round noonish. Dortmund vs. Freiburg is scheduled for 9:30 a.m. on Saturday, Oct. 3.

ESPN+ runs $5.99 a month, or $49.99 a year. It's available on just about any modern streaming device, from Roku and Amazon Fire TV to Xbox and web browsers.

If you're really serious about your content, though, we highly recommend taking a look at the epic ESPN+/Disney+/Hulu bundle, which gets you those three services for the price of two.

The good news for this week's game? Dortmund doesn't have to face Ausburg again, having lost to them 2-0 in Matchday 2, behind goals from Daniel Caligiuri (who else, right?) and Felix Uduokhia. The less good news? Dortmund followed that loss with another on Wednesday to Bayern Munich in the DFL Supercup.

So maybe consider Matchday 3 a new start of sorts.

Freiburg currently sits fifth in the tables with 4 points, having beaten VfB Stuttgart 3-2 in the opener, then playing to a 1-1 draw against VfL Wolfsburg in Matchday 2. Borussia Dortmund, meanwhile, is a point back after its opening win over Borussia Mönchengladbach, followed by last week's stunning 2-0 loss to Augsburg.

Dortmund hopes to have Jadon Sancho back for this week's game, after sitting out the past two games. He's had four goals in as many games against Freiburg, so that would be a big leg up.

BVB also has history on its side, with an 18-game unbeaten streak in the Bundesliga when playing Freiburg. And Erling Haaland has managed 15 goals in 17 league appearances.