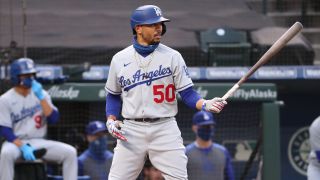 Think the Dodgers are going to lose in the Wild Card round? Don't Betts on it. (Image credit: Photo by Abbie Parr/Getty Images)

With the best team in baseball in action, everyone wants to know how to watch Los Angeles Dodgers vs. Milwaukee Brewers live stream in the Wild Card series this week. Leave it to L.A. to be loaded with superstars in a big budget production. They are in World-Series-or-bust mode, but can the lowly BrewCrew rise up from a losing record to take down this super squad?

Here is how you can watch this Wild Card Series online featuring the Los Angeles Dodgers vs. Milwaukee Brewers.

How to watch Los Angeles Dodgers vs. Milwaukee Brewers live stream in the U.S.

The Los Angeles Dodgers vs. Milwaukee Brewers Wild Card series starts on Wednesday, September 30 at 10 p.m. from Dodger Stadium in Los Angeles. Games 1, 2 and 3 (if necessary) of this series will air on ESPN.

Sling TV’s Orange Plan has ESPN streaming online for only $20 for your first month. You can upgrade to the combined Orange + Blue Plan to get most MLB Playoffs games among the live streaming services. (See all Sling TV channels.)

YouTube TV is a highly recommended option for fans who want to see every game, and it includes ESPN for Los Angeles Dodgers vs. Milwaukee Brewers. For $65, the service also has ESPN, Fox, FS1, TBS and MLB Network for all the other national MLB Playoffs games. (See all YouTube TV channels.)

Fubo TV  recently added ESPN and ESPN2 to their package that already has Fox, FS1 and MLB Network. Just be aware that Fubo no longer includes TBS, so fans who want to see the American League Playoffs too might be disappointed once it gets to the next round. (See all Fubo TV channels.)

The Los Angeles Dodgers (43-17) have the best record in MLB this season, and they’ve been playing like a team on a mission. The Dodgers were all shook up this offseason by the Astro’s cheating scandal, as they recently lost the World Series to Houston while suspecting something was wrong.

The Dodgers ranked first in the majors in runs scored and earned run average, so this team excels at it all. They come in on a roll, winning ten of their last 12 games. From shortstop Corey Seager to outfielder Mookie Betts and pitcher Clayton Kershaw, this team is stacked with stars and it would be a shock if they were upset this round.

The Milwaukee Brewers (29-31) hope to pull off that shocking upset, after finishing under .500 but still making the playoffs. They are limping into the playoffs after losing five of their last eight games, but all they need is a chance.

It may be hard to imagine a team that finished near the bottom in batting and runs scored will be able to keep up with the Dodgers, but stranger things have happened in the MLB playoffs before. If they’re going to get it done, expect a stellar performance from starting pitcher Brandon Woodruff, who leads the Brewers in ERA and strikeouts. He faces Kershaw in game two of this series.

How to watch Los Angeles Dodgers vs. Milwaukee Brewers live stream in the United Kingdom

If you're in the United Kingdom, you can still see lots of postseason baseball action. The Los Angeles Dodgers vs. Milwaukee Brewers live stream Wild Card series will be on BT Sport ESPN channel.

The Los Angeles Dodgers vs. Milwaukee Brewers on BT Sport Pass will stream in the BT Sport Box Office app, available for iOS and Android, or on the BT Sport website. The apps can also be used with Google Chromecast or Apple Airplay to watch on your big screen. Check the BT Sport schedule each day, as games will be on BT Sport 1, BT Sport 2, BT Sport 3 and BT Sport ESPN.

How to watch Los Angeles Dodgers vs. Milwaukee Brewers live stream in Canada