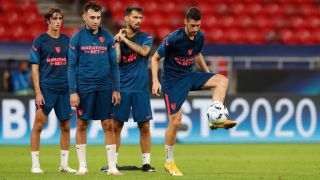 The details? We've got 'em. Here's how to watch.

How to watch Bayern Munich vs. Sevilla in the UEFA Super Cup from anywhere

If you want to watch today's match between Sevilla and Bayern Munich but you're outside your usual viewing area and unable to use your usual service, a VPN might well get things done for you. The long and short of it is that a VPN can route all your traffic through a specific country. So if you're usually in Spain and otherwise would have watched the match on Movistar but instead have found yourself in Finland, you can use a VPN to make it look like your computer is back in Spain. (Which, for all intents and purposes, it will be.)

How to watch Bayern Munich vs. Sevilla in the UEFA Super Cup in the United States

If you're in the United States, there's one way to watch today's game between Bayern Munich and Sevilla. And that's CBS All Access.

It's the streaming service from ViacomCBS that isn't just home to the bulk of the ViacomCBS catalog, it also has incredible exclusive series like Star Trek: Discovery, The Twilight Zone, and The Good Fight. And, yes, it's where you'll find all kinds of live sports that you can't get anywhere else.

CBS All Access runs $5.99 a month after a free trial. For an additional $4 a month you can get rid of most advertising.

How to watch Bayern Munich vs. Sevilla in Canada

For our neighbors to the north, today's match will be available on DAZN.

It's been a few weeks now since the two teams wrapped up their seasons. Both have won their previous five matches. But either team has the most stellar record when it comes to the UEFA Super Cup. Bayern is 1-3 in its four appearances, and Sevilla has emerged victorious in just the first of its five Super Cup matches, with that win against Barcelona back in 2005/06. Bayern's win is its most recent, versus Chelsea in 2012/13.

Bayern also finished first in the German Bundesliga and the German Cup, while Sevilla finished fourth in La Liga and bowed out in the round off 16 in Copa de Rey.

The teams have met just once before in a UEFA-sanctioned match, with Bayern barely managing a win in the 2017/18 quarterfinals.

After this match, Bayern and Seville will head to the Champions League group stage draw on Oct. 1. (Yes, it's time to get that league up and running again already. It was delayed in 2020 because of the global pandemic.)