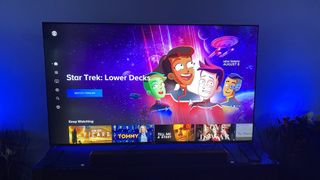 CBS All Access now has more than 20,000 movies and episodes available, with another 10,000 to come. (Image credit: WhatToWatch.com)

ViacomCBS today announced a major expansion and rehabilitation of CBS All Access as part of its plan to create a sort of super streaming service that encompasses all of the media giant's brands.

Chief among the changes is the addition of more than 3,500 episodes from the entire ViacomCBS portfolio, including BET, Comedy Central, MTV, Nickelodeon and Smithsonian Channel — to name but a few.

We're also getting news of new original series headed our way in 2021, starting with with the children's series Kamp Koral, as well as a spinoff series from Spongebob Squarepants. (And CBS All Access reminds us that it'll be the only place to watch The Spongebob Movie: Sponge on the Run in early 2021.

CBS All Access now touts more than 20,000 episodes and movies in total, and it's expecting another 50 percent increase in the months to come as more Paramount content comes online.

What's not changed yet is any new branding. ViacomCBS promises "full and rebranded service" to come early next year.

“Today marks the beginning of an exciting evolution of CBS All Access into the subscription streaming home for ViacomCBS and a preview of what’s to come,” Marc DeBevoise, Chief Digital Officer, ViacomCBS and President & Chief Executive Officer, ViacomCBS Digital, said in a press release. “As the first Network to market with a branded direct-to-consumer service more than five years ago, we have the advantage and experience of building it from the ground up, establishing distribution points across all major platforms, creating a service with high user engagement and low churn, and crafting a robust slate of exclusive originals from which we continue to build. By bringing the valuable IP and creative capabilities from across ViacomCBS together in one product, we will deliver to consumers a compelling and differentiated service with something for everyone across news, live sports and on-demand entertainment in every genre.”