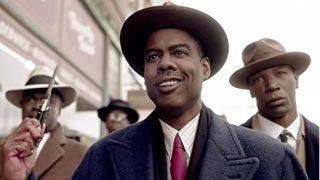 This week is a busy one on Hulu. The Addams Family became available on-demand on the streamer today, and on Friday, Judy, starring Renee Zellweger as Judy Garland arrives.

All of season 3 of S.W.A.T also arrives on Friday, just in time for a weekend binge session, and the season 4 of Fargo premieres on Monday.

Members of the mysterious and spooky Addams family -- Gomez, Morticia, Pugsley, Wednesday, Uncle Fester and Grandma -- are readily preparing for a visit from their even creepier relatives. But trouble soon arises when shady TV personality Margaux Needler realizes that the Addams' eerie hilltop mansion is standing in the way of her dream to sell all the houses in the neighborhood.

Renee Zellweger is "remarkable" in this unforgettable portrait of showbiz legend Judy Garland.

S.W.A.T. stars Shemar Moore as a locally born and raised S.W.A.T. sergeant newly tasked to run a specialized tactical unit that is the last stop in law enforcement in Los Angeles. Torn between loyalty to where he was raised and allegiance to his brothers in blue, former Marine Daniel "Hondo" Harrelson has everything it takes to be an excellent leader and bridge the divide between his two worlds.

A Wilderness of Error is a five-part documentary series based on the book of the same name by filmmaker and author Errol Morris, who also appears in the series. When Green Beret Army surgeon Jeffrey MacDonald is sent to prison after being convicted of killing his pregnant wife and two young daughters, a storm of swirling narratives challenges the very ability to find the truth all the while overshadowing a chilling possibility: MacDonald may be an innocent man. Marc Smerling re-investigates the complicated case that has spanned decades in an attempt to find the truth.

An original adaptation of the Academy Award®-winning feature film, Fargo features an all-new "true crime" story and follows a new case and new characters, all entrenched in the trademark humor, murder and "Minnesota nice" that made the film an enduring classic. Oscar® winner Billy Bob Thornton stars as "Lorne Malvo," a rootless, manipulative man who meets and forever changes the life of small town insurance salesman "Lester Nygaard," played by BAFTA Award® winner and Emmy®-nominated Martin Freeman. Colin Hanks plays Duluth Police Deputy "Gus Grimly," a single dad who must choose between his own personal safety and his duty as a policeman when he comes face-to-face with a killer. Allison Tolman also stars as "Molly Solverson," an ambitious Bemidji deputy. An FX Networks Original Series.